Feeling that Complex Projective 4-Space isn’t sufficiently seasonal, I was compelled to alter the colour scheme of the banner to reflect the fact that today, the 31st October, is All Hallows’ Eve, popularly abbreviated to Hallowe’en. Anyway, I actually prefer the new banner, so it may stay that way until the next festive holiday. Not that it’s particularly distant: we have Bonfire Night rather soon, followed shortly after by Diwali.

Adhering to the Hallowe’en theme, the cubic curve shown above is known as the Witch of Agnesi. Given that it looks nothing like a witch, why is the curve so named? Its namesake, Maria Agnesi, was certainly not a witch herself, nor even suspected of being one. It transpires that it was lost in translation — the Italian word ‘averisera’ (versine curve) greatly resembles ‘avversiera’ (witch), so the Lucasian Professor of Mathematics misinterpreted the name. This is not the only occurrence of this, either. The much more familiar Klein bottle (Flasche in German) was originally called the Klein surface (Flache). This has, in turn, led to people drawing embeddings of the surface resembling bottles: 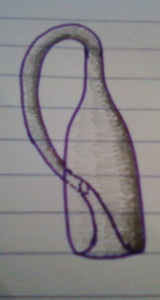 Notice how I have managed to provide some tenuous links from Hallowe‘en to topological surfaces. This is also riddled with rather interesting parlance, such as a pair of pants (not to be confused with number theory trousers, which I’ll explain later). This refers to a very basic topological object from which many other surfaces can be derived, such as a two-holed torus (by stitching together two pants in the obvious way). I don’t think you can get a lower genus than that, though, so your attempts to make a Klein bottle out of pants will probably fail. I’d love to be proven wrong, though.

By the way, the link to the text-only chess cipher is now broken again, since pentadecathlon.com has given up the ghost.