Due to popular demand, the frequency of Cipher Tuesdays has increased from every four weeks to its theoretical limit of every week. Also by popular demand, this cipher is given as both an image (for manual solvers) and delineated text (to appease Vishal and others who favour cryptanalysis software). Firstly, the image: 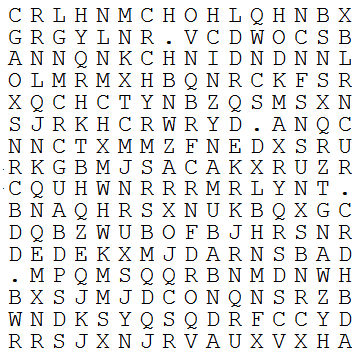 Some information (namely the layout) is lost by going from two dimensions down to one, so bear that in mind if you choose to use the text-only version instead:

Good luck, and enjoy. Hopefully it will take people slightly longer to do this particular cipher. It’s more complicated than the last one, involving two distinct stages, but they’re separable and there are enough clues lurking around to guide you along the correct path. As before, there is a secret password-protected area you can only access after solving it.

Rather than employing some obscure segue here, I shall simply and abruptly mention that the Call My Bluff at the Trinity Mathematical Society was superb. Unlike in the actual television panel shows, both our team and the opposition successfully guessed every round correctly. This resulted in a tie-breaker round, which was to accurately recall the side length of the smallest perfect squared square. Embarrassingly, I couldn’t remember it despite having mentioned it here just a few hours ago! We then proceeded to a second tie-breaker, which James Munro won with his fantastic simultaneous juggling and recital of π.