A particularly useful result in real analysis is, remarkably, applicable to combinatorics problems where reals are not even mentioned. It is the fabled Bolzano-Weierstrass theorem. The statement of the theorem is that ‘every bounded sequence has a convergent subsequence’. It is not too difficult to prove this directly from the least upper-bound axiom of the real numbers.

Suppose we have a large desert, in which we are chasing a lion. What is the best way to catch it? Unlike in the trailer of the Travelling Salesman movie, you’re not allowed to melt the sand and imprison your feline friend in a sea of glass. The solution is to erect a fence, splitting the desert into two halves. Then choose the half containing the lion, and repeat the process, halving the area again in which the lion can roam. Eventually, you can confine the lion to an arbitrarily small area.

The proof of the Bolzano-Weierstrass theorem is similar, but with an infinite number of lions. Each time we erect a fence, we can choose a smaller interval still containing infinitely many lions (real numbers). We get an infinite sequence of intervals, each one half as large as the previous one. For instance, the result may resemble this:

The Bolzano-Weierstrass theorem applies to spaces other than closed bounded intervals; the closed unit ball in R^n is another example (same proof). We describe such spaces as sequentially compact.

Now that we have the Bolzano-Weierstrass theorem, it’s time to use it to prove stuff. Ordinary people would apply it to problems in real analysis (where it does indeed work), but it’s more fun to prove theorems in combinatorics. The first problem is this: 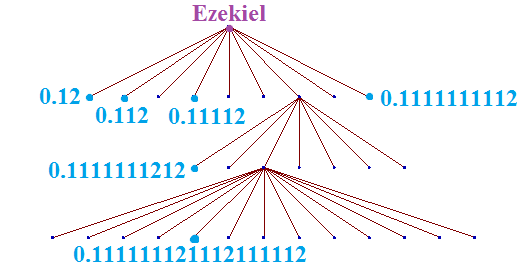 Tiling the plane with polyominoes

The general problem of determining whether a set of polyominoes can tile the plane is difficult, as we cannot guarantee a periodic tiling. Indeed, it’s undecidable. Similarly, it’s difficult (NP-hard for the finite case) to 3-colour a particular map. Hence, our proof must somehow use the partial tilings (such as the one below) to construct a full tiling of the entire plane. 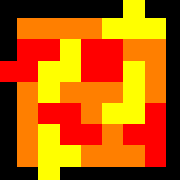 As shown above, there is a 3-colourable tiling of a 7 by 7 square (with overhang) by some polyominoes. We can convert it into a real number in the interval [0, 1] by reading the sequence of colours along a spiral as digits (red = 1, orange = 2, yellow = 3): 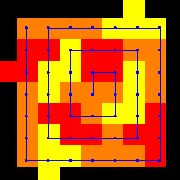 With help from the Bolzano-Weierstrass theorem, we can actually eliminate the second of these possibilities. Specifically, for a given packing, we represent the nth rectangle by a triple (x, y, θ) of bounded reals giving the coordinates of the rectangle and its orientation. Concatenating all of these triples together gives a sequence {a_(1,1), a_(1,2), a_(1,3), …}. Repeat for another packing of a square with a smaller side length, {a_(2,1), a_(2,2), a_(2,3), …}. Repeat this infinitely many times for a decreasing sequence of side lengths converging to 1 (which we can do, assuming the second possibility). This gives a sequence of sequences.

By Bolzano-Weierstrass, we can take a subsequence where all of the a_(i,1)s converge. Then, within this subsequence, take a subseqence where all of the a_(i,2)s converge. Repeat ad infinitum. The limit gives a tiling of the unit square by these rectangles (Proof: assume otherwise, then there must be some pair of rectangles which overlap or overspill by some real value h > 0, whence we obtain a contradiction).

There is a related problem proposed by Coxeter, asking for the diameter d of the smallest circle into which discs of radii {1, 1/2, 1/3, …} can be packed. It transpires that the trivial lower bound of d = 3 can actually be attained. This is not a tiling, by the way, as the discs have a total area of π^3/6 whereas the large circle has an area of 9π/4 (convince yourself that the latter is substantially larger than the former).