A long time ago, in a monastery far away, a monk called Sebastian Truchet decided to create patterns by tiling a square grid with a single type of tile (in two orientations). For instance, one possible pattern of 64 Truchet tiles is shown below: 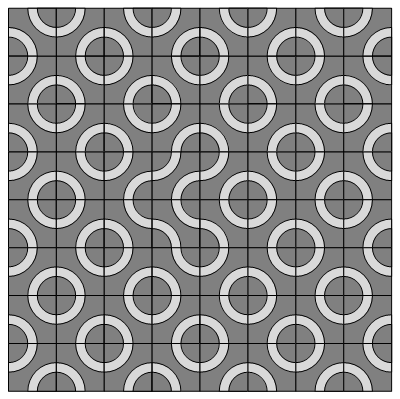 There is a single non-trivial loop of length 12 on a background of trivial loops (henceforth referred to as ‘trivs’) of length 4. In general, we consider these patterns on an infinite grid of Truchet tiles, all but a finite portion of which is the lattice of trivs. To obtain this background pattern, colour the grid in a checkerboard fashion, where the colour of the square determines the orientation of the tile to place upon it.

The actual tiles do not have colours; the red in the diagram above is for indication purposes only. A loop (a portion of which is visible in this 2 by 2 block, and shown in red) can either enlarge or shrink by swallowing or liberating the central triv. The reversibility of this process is indicated by the double-ended arrow, and will apply to all other moves as well.

A straightforward proof by induction can be used to show that any finite configuration of loops can be completely ‘evaporated’ into the background lattice of trivs. By reversibility, any configuration can spontaneously emerge. On a rather pointless side-note, all Truchet tiles can be 2-coloured and performing moves does not damage the consistency of the colouring. I’ve 2-coloured a random Truchet tiling below: 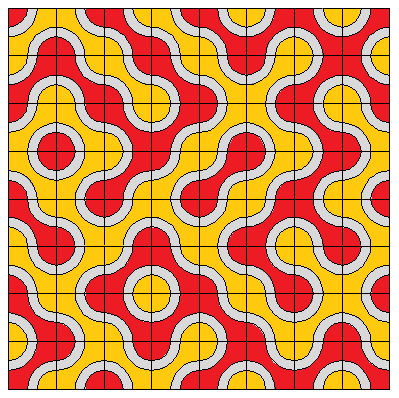 A final observation is that the length of every loop must be divisible by 4. This is easy to prove, and I’ll leave it as an exercise to the reader.

Things get more interesting when a second type of tile, the bridge, is added. This also has two distinct orientations, which differ by a rotation by ½π. Much more complicated structures can arise when the bridge is added, including knots and links: 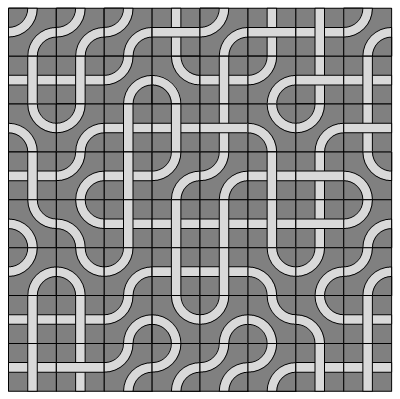 One particularly basic loop is a lemniscate, which cannot spontaneously evaporate under repeated application of the Type 0A rule. The two branches of the lemniscate can expand and contract, just like ordinary loops. 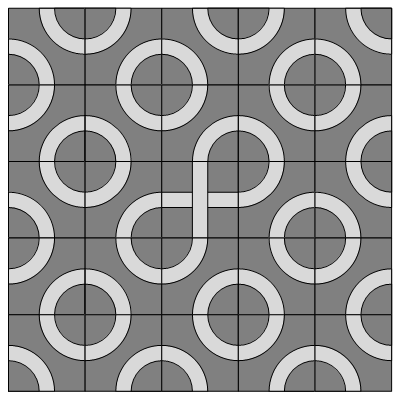 The behaviour is still uninteresting, since the lemniscate cannot drift along the board; the bridge is fixed as it cannot feature in a Type 0A move. Hence, it’s quite an unrealistic model of … whatever we’re supposed to be modelling. ANKOS meets string theory?

Hence, we’ll add a second move, Type 0B, which allows a bridge to move in space without affecting the topology of anything. The Type 0B move is depicted below:

As usual, the colours are irrelevant and merely used to illustrate that the topology is preserved by this move. When the bridge is ‘shifted’ by one square, the orientation flips to obey parity constraints. So, lemniscates can now drift across the board as well as growing and shrinking. We now need to add another three moves, known as Reidemeister moves, to enable equivalent knots to transform into each other. Through a combinatorial and geometrical casebash, one can show that two knot diagrams can be interchanged if and only if the knots are equivalent. 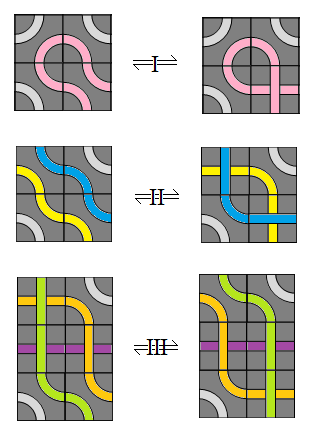 Interestingly, the third of these diagrams is an ambigram — it is identical if you rotate the entire thing by π. Lemniscates can now unravel to give a self-avoiding loop, which can then evaporate into trivs. Equivalently, any unknot can appear from the quiescent background. However, non-trivial knots such as the trefoil cannot evaporate into trivs, nor fuse together, nor exhibit a whole manner of other unrealistic behaviour.

Proving that the trefoil is not equivalent to the unknot took a surprising amount of time. The simplest knot invariant is tricolourability: 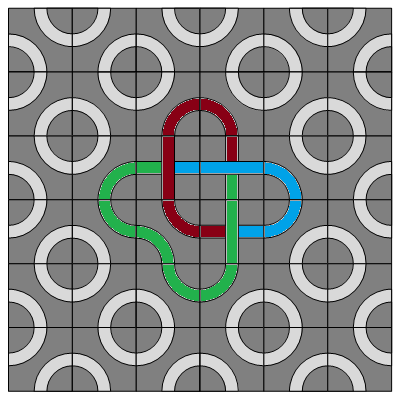 A knot diagram is tricolourable if you can colour the components of the knot such that:

Nowadays, knot invariants are much more sophisticated. Examples include the HOMFLY polynomial (named after six of its eight inventors), the Alexander polynomial and the Jones polynomial. It is an open problem as to whether the most advanced set of invariants, the Vassiliev invariants, can distinguish between any two knots.