This post was inspired by the conception of a new ‘origami society’ at Trinity. Having never tried it before, it took me a while to decipher the instructions for the construction of a dragon. 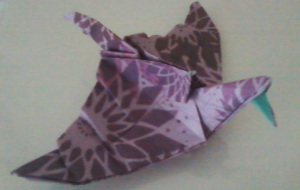 There are rather restrictive constraints on what possible patterns of folds can be realised. Firstly, arrangements of folds are represented as plane graphs (known as ‘crease patterns’) with two distinct types of edges, namely ‘mountain folds’ and ‘valley folds’. There is actually a third type of edge, a ‘boundary edge’, since we’re dealing with a finite square rather than R^2; the boundary edges form a cycle such that all other vertices lie in the closed subset of the plane bounded by this cycle.

This is the only combinatorial restriction, and yields graphs such as this one: 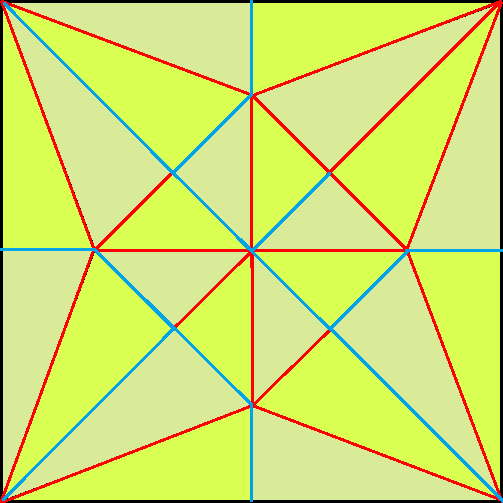 There are, however, more geometrical constraints.

Finally, there is the constraint that the three-dimensional embedding of the folded paper does not self-intersect. This is much more difficult to verify from the diagram than the other two properties.

It’s not too difficult to show that these operations are equivalent to solving a quadratic given its coefficients. Three famous classical problems, namely ‘doubling the cube’, ‘trisecting the angle’ and ‘squaring the circle’, are unsolvable with these operations (proof: Galois theory for the first two, and transcendentality of pi for the third).

It can be shown via Galois theory that the nth roots of unity can be constructed if and only if n is a product of a power of two and distinct primes of the form 2^k + 1 (i.e. Fermat primes). For instance, Gauss managed to express exp(2πi/17) in terms of square-roots, thus effectively constructing the regular 17-gon. 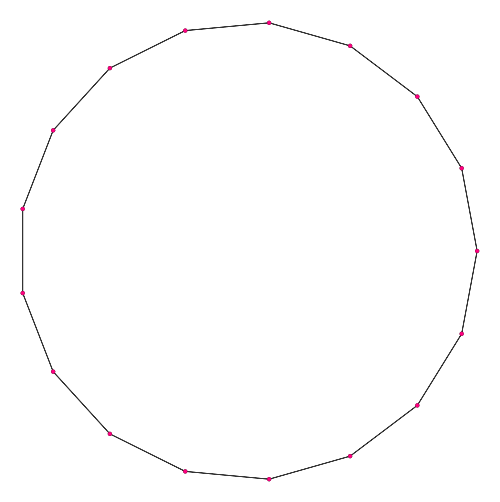 However, this seems to be digressing somewhat from the original topic of origami. It is overkill to add three new instruments (a pencil, straightedge and compass) to our arsenal, since origami alone can be used for geometrical constructions. Even though circles cannot be constructed for obvious reasons, it is a remarkable fact that we can still construct all of the same points as with the compass and straightedge. Indeed, as will be revealed shortly, a proper superset of those points are origami-constructible.

The ordinary Euclidean constructions are replaced with seven different postulates, known as Huzita-Hatori axioms (despite not actually being axioms).

The sixth postulate is the powerful one, which (in conjunction with the others) enables the general cubic to be solved. This solves both the problems of trisecting the angle and doubling the cube, and allows the construction of nth roots of unity if and only if n is a product of a power of two, a power of three and distinct Pierpont primes.

It is conceivable that someone could write an origami version of Euclid’s Elements. Also, this would be more powerful than Euclid: Morley’s angle trisector theorem cannot be proved by compass and straightedge, since the equilateral triangle cannot be constructed in general, but is within the power of origami.