This is the 100th article on cp4space, and is inspired by a discussion last night with Gabriel Gendler.

Suppose we have a triangle in the Euclidean plane

. We can identify the Euclidean plane with the complex plane, and represent the triangle by a set of three complex numbers (one for each vertex). I’ll call these complex numbers x, y and z (corresponding to vertices A, B and C, respectively). We’ll now consider a few interesting points in the plane of the triangle: 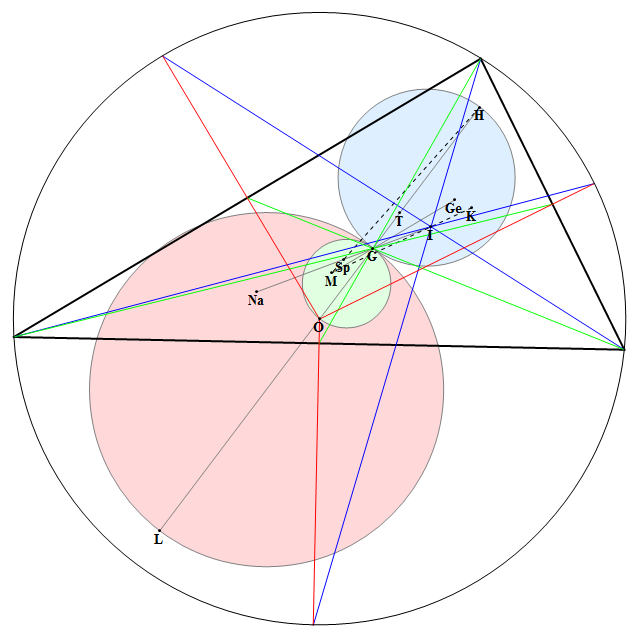 The centroid, G, is the easiest triangle centre to express. It’s simply

, which is the arithmetic mean of the three vertices. Here, we consider triangle centres to be functions from

, which takes the three vertices and returns that triangle centre.

The circumcentre, O, is somewhat more difficult to find. It’s the intersection of the three perpendicular bisectors (shown in red in the diagram above), and we can solve simultaneous linear equations to obtain an expression for the circumcentre.

The orthocentre, H, and the nine-point centre, T, are expressible as simple linear combinations of O and G. For instance,

. These points lie on the Euler line, as you can see in the diagram.

Finally, we can also get a simple expression for the symmedian point (either by considering areal coordinates or harmonic quadrilaterals, both of which are explained in MODA).

Consider the Steiner inellipse. This is the largest ellipse that can be contained within a triangle, or (equivalently) the image of the incircle of an equilateral triangle after it has been hit with an affine transformation to become the triangle of interest. Probably the easiest way to explain is with a diagram: 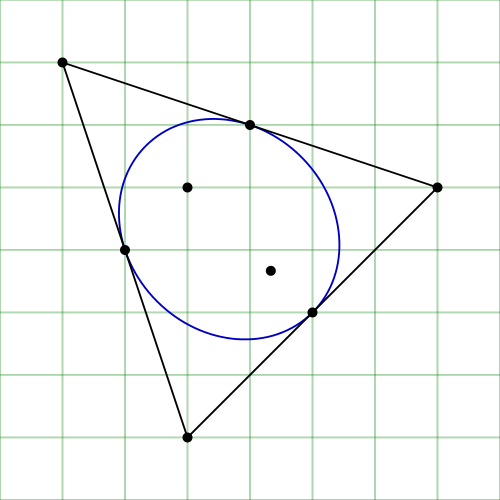 Of course, we can now solve this quadratic:

This is a multi-valued function, which gives both foci. It is impossible to create an algebraic expression that gives one focus but not the other; they are roots of the same minimal polynomial with coefficients in

. Points with this property (for general fields) are known as Galois conjugates.

The two foci in the previous expression are the same when the radicand (thing being square-rooted) is equal to zero, i.e. when

. This is equivalent to the triangle being equilateral. 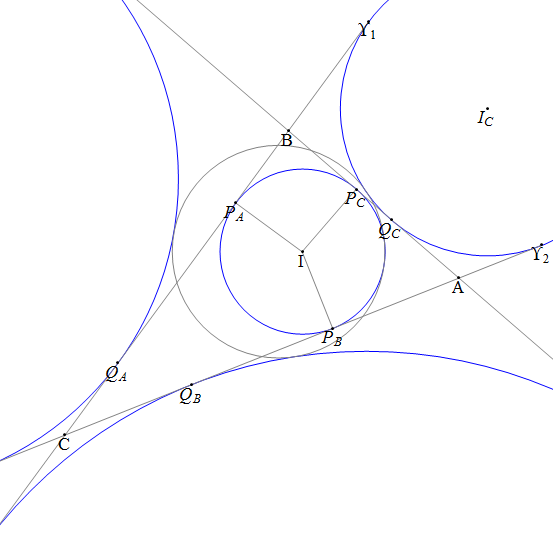 The centres of these circles,

, are all roots of the same minimal polynomial, namely this horrible quartic in w:

Here, I’ve used Σ_alt to indicate the alternating sum over permutations of (x, y, z). This is like the symmetric sum, but where the sign of each term is determined by the permutation of the parity. For example, the circumcentre is given by alt[x y y*]/alt[x y*].

. Some triangle centres, however, have no such expressions. One particularly interesting example is the Hofstadter point, X_360. Let the Cevian AX_360 intersect the line BC at D; this splits it in the ratio