The connect sum of two knots is obtained by joining them together in the obvious way. There is, however, one small detail. If you define this naïvely, then you won’t necessarily obtain an unambiguous connect sum. For instance, consider the following: 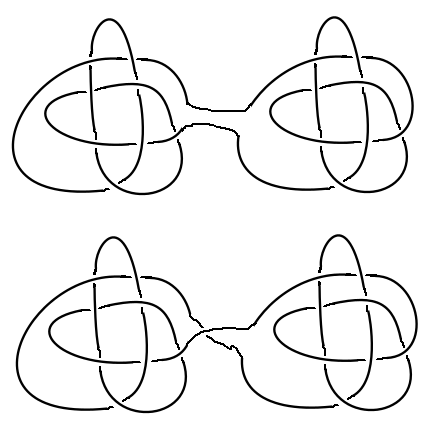 It’s difficult to show that the two above knots are non-equivalent (as usual), but it is indeed the case. The best way to avoid this problem is to consider directed knots instead of undirected knots. The knot shown below is one of the simplest ‘non-invertible knot’, i.e. one which cannot be deformed into itself such that the directions of the arrows change: 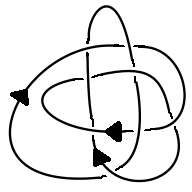 Note that connect sum is both commutative and associative, with the unknot O (simple loop) forming an identity. The set of knots under the operation of connect sum is thus an Abelian monoid.

For this to be an Abelian group, we would need inverses. Unfortunately, this is not the case; for instance, there is no knot A that behaves as an ‘anti-trefoil’:

A simple proof of this is to note that the trefoil knot is tricolourable, whereas the unknot is not, and that the connect sum of a tricolourable knot and an arbitrary knot gives another tricolourable knot. This contradicts the above equation, so there is no anti-trefoil. Indeed, more generally, there are no two non-trivial knots A and B such that

. The standard proof is the Mazur swindle:

This appears to be massively cheating. For instance, the argument could be applied to 1 and −1 to deduce that 1 = 0, which is clearly erroneous. However, it is intuitive that this reasoning works in the context of knots, since it can be realised geometrically.

Interestingly, the Abelian monoid of knots exhibits unique factorisation (Schubert’s theorem), so it suffices to categorise the ‘prime’ knots that cannot be expressed as connect sums. The knots tabulated by Rolfsen were the prime knots, the first few of which can be viewed here.

In addition to knot theory, the principle of the Mazur swindle can be applied to other objects. For instance, we can express the free module

as the direct sum

of itself and something which isn’t a free module over

. Without this idea, it’s pretty difficult to find modules satisfying these properties.