Things that shouldn’t work, but do

There are several mathematical heuristics (it’s difficult to call them proofs), which are non-rigorous in the best of cases and sometimes seemingly insane. For example, Euler’s ‘proof’ that the sum of the reciprocals of the primes diverges at an asymptotic rate of

manipulates divergent series as though they were convergent, and does other dubious steps such as taking the logarithm of infinity. 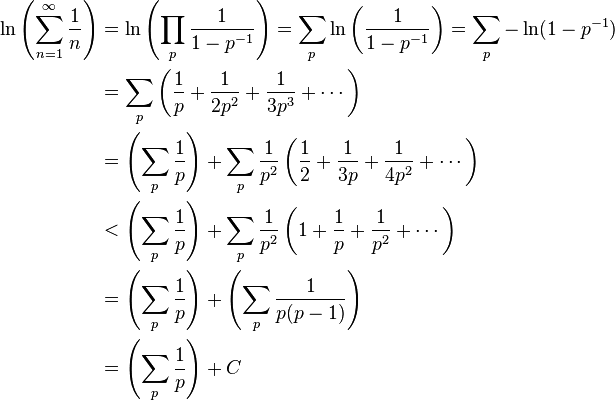 He proceeded to conclude the rate of divergence of the series. It transpires that whilst the proof was non-rigorous, one can easily repair it, in this case by replacing the infinite summations with partial sums and taking the limit. It’s very messy, though, but still possible (I recall doing this for an earlier cp4space post).

Seven trees in one

Whilst the Euler proof cheats slightly, it may appear to the untrained eye to be completely legitimate. We’ll now take a look at a more extreme example, which appears more like a mathematical joke than a proof, but again reaches a correct conclusion. Later, a rigorous general proof was published, stating ‘whenever this silly approach is employed, and certain constraints are obeyed, the result of this process is a true statement’.

The subject is Andreas Blass’ Seven Trees in One, which I would probably rank among my favourite mathematical papers. Essentially, the heuristic argument runs like this:

Blass then provides such an elegant bijection in the paper. Here is a diagrammatic representation of the bijection, where the letters a, b, c, … represent arbitrary trees (including the ’empty tree’ consisting of a single leaf). To use this diagram, apply the first rule that applies to your 7-tuple. 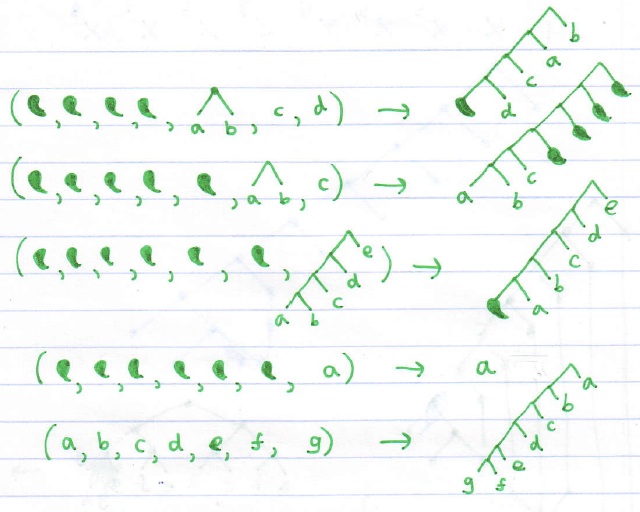 Why does this work?

It is obvious that there were many non-sequiturs in the above derivation. Nevertheless, Blass provided a rigorous justification of this argument.

If we replace each of these steps with the elementary bijection, the whole thing gives the bijection from trees to 7-tuples of trees.

0 Responses to Things that shouldn’t work, but do