I’m not sure exactly how to motivate a discussion of the Hoffman-Singleton graph, except perhaps by beginning with the following problem from the October 2011 edition of the Advanced Mentoring Scheme:

This problem seems quite innocuous at first, and one would not expect there to be particularly deep mathematics associated with it. Even more surprising is that there’s a very specific unsolved problem related to this.

You might want to attempt this AMS question; it’s not particularly difficult. We can very quickly characterise these graphs as having diameter 2 (any pair of vertices can be connected by a path of length at most 2) and girth 5 (the length of the shortest cycle is 5), as well as noticing that every pair of vertices is contained in a 5-cycle, and so on. Pretty soon, it should be obvious that the smallest such graph is the pentagon itself: 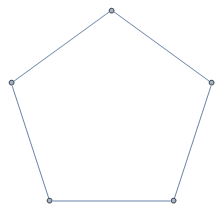 The leftmost diagram is the bog-standard drawing of the Petersen graph, which is the most instantly recognisable. The second one looks completely different, but more careful analysis demonstrates their equivalence. Taken together, it becomes clear that we’re dealing with a graph of immense symmetry. We can actually think of the Petersen graph as the skeleton of a dodecahedron, but with opposite vertices identified with each other. The complete graph K6 can be obtained by applying the same process to the icosahedron.

The third diagram differs only trivially from the first (there is a continuous deformation of the plane which relates them), and shows that the Petersen graph can be drawn such that all edges are the same length.

All of these drawings contain crossings, since the graph is non-planar (indeed, it is one of the simplest graphs that is not linklessly-embeddable) by virtue of having both the K5 and K3,3 as minors. It can, however, be drawn on the surface of a torus without crossings; I’ll leave the proof as an exercise to the reader.

Anyway, the point is that the Petersen graph satisfies the conditions specified in the problem.

We’ve shown that there exist graphs of degree 2 and 3 with these properties. The next graph has degree 7, and is known as the Hoffman-Singleton graph. Noam Elkies proves its existence and uniqueness here. 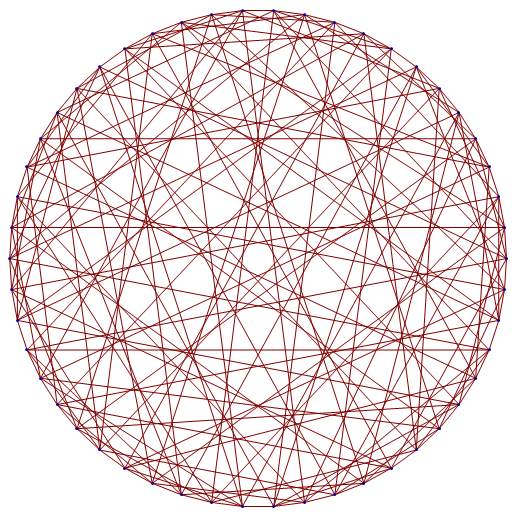 Although it is not apparent from the rendering above, this graph is also massively symmetric. Ed Pegg provides a very elegant construction of the graph, which I’ll repeat below.

It should be evident, with a little thought, that this gives a 7-regular graph. In fact, Pegg’s construction makes it straightforward to show that the conditions of the AMS problem are satisfied:

Hence, we can confirm that the Hoffman-Singleton graph actually works. Hooray!

Ed Pegg actually went further than merely constructing the graph; he designed a playable card game based on it. The case-bash above is precisely the solution to Pegg’s Puzzle E, showing that any two non-connected vertices have a unique common neighbour.

Although Pegg’s construction separates the vertices into clusters of sizes 15 (the fanos) and 35 (the triads), rest assured that the graph is actually vertex-transitive and thus all vertices are equivalent.

It is a theorem, the Hoffman-Singleton theorem, that any graph satisfying those three properties must have either degree 2, 3, 7 or 57. In the first three cases, existence and uniqueness have been confirmed (with the pentagon, Petersen graph and Hoffman-Singleton graph, respectively).

As for degree 57, it is unknown whether such a graph exists. I very much hope that there is a unique such graph (since it would be another exceptional object, and exceptional objects are beautiful things), and there’s probably a really clever construction. It would have 3250 vertices and 92625 edges.