After Zhang established the result that there are infinitely many pairs of primes separated by at most 70000000, there has been a massively collaborative effort to reduce this bound. The efforts are concentrated on developing methods to strengthen each of three variables in the original paper:

For the last few hours, the progress has rather resembled a game of tennis between Andrew Sutherland and xfxie, with the world record for H being repeatedly tossed between them. At the moment, Sutherland is winning, having reduced H down to 285278. You can get a slice of the action by viewing this comments thread, and perhaps chiming in with a smaller admissible set*. 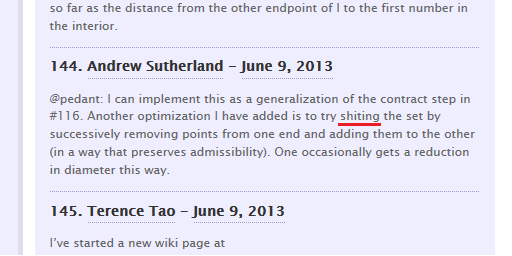 As you can see, Sutherland has introduced a new optimisation together with a rather colourful piece of new terminology to describe it! This technique can sometimes lead to incremental (or should that be excremental?) reductions in the upper bound for H.

* Entries are to be given as a list with the filename admissXble_YYYYY_ZZZZZZ.txt, where X is a vowel used to specify the author (i for xfxie and a for Sutherland; you can choose any other vowel in your surname), YYYYY is the size of the set (preferably one of the established or conditionally proved values of k0), and ZZZZZZ is the diameter (an upper bound for H, assuming your value of k0 is correct). Examples are admissible_26024_286216.txt and admissable_10719_108514.txt.

We’re still waiting for confirmation that the value 10719 is valid; if so, the upper bound on H will drop from 285278 to 108514 — a significant improvement, but still considerably far from the desired target of 2. Here’s the timeline at the moment: 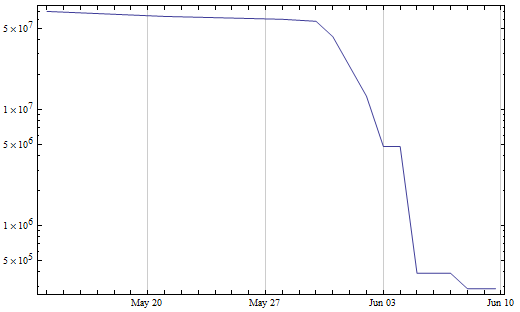