In an earlier post, I briefly mentioned the idea of repeatedly iterating the Aut operator (a function which takes an abstract group as its input and outputs the automorphism group) and observing the behaviour. There have been papers on the transfinite version of this problem, and a few of the theorems are applicable here. Other results can easily be proved from first principles.

The tree of ancestors of the trivial group is straightforward to compute. It consists entirely of cyclic groups, the orders of which form sequence A117729 in the OEIS. I’ve sketched the first few terms of this tree:

Since there are so many groups, I decided to concentrate on observing the behaviour of cyclic groups under iteration of the Aut operator. The automorphism group of the cyclic group of order n is an Abelian group, namely the multiplicative group of totients modulo n. We’ve already covered orders up to and including 7 in the above tree, so let’s see what happens to the cyclic group C8. We first get the Klein 4-group, and then the symmetric group S3: 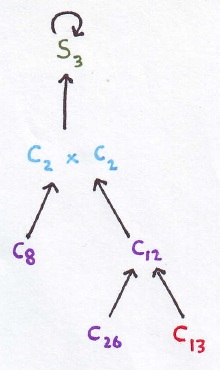 In this case, S3 arises as the general linear group over the vector space (F2)². This applies to any direct sum of Cp cyclic groups, such as (F2)³. We get the general linear group GL(3,2), which happens to be isomorphic to PSL(2,7). Its automorphism group is PGL(2,7), which is a complete group (centreless group with no outer automorphisms), and therefore maps to itself. 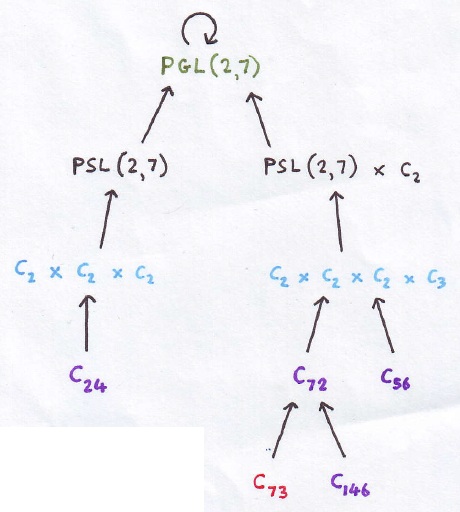 So far, all of the ‘terminal groups’ have been complete groups. It turns out that our next cyclic group, C15, will result in a group which is equal to its own automorphism group despite not being centreless. In essence, the existence of a non-trivial centre cancels out the outer automorphism. 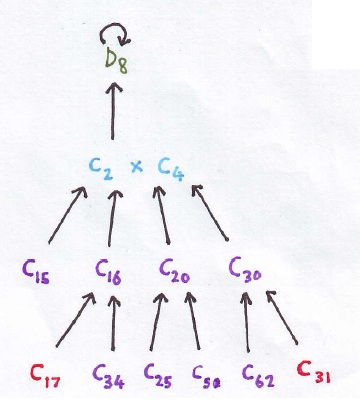 In the existing literature, people treat the Aut operator as more than a function on the set of finite groups, and generalise this to a transfinite process. Indeed, they do not consider D8 to have ‘stabilised’, since it is not a complete group, but rather declare that it terminates in ω + 1 steps, with the ωth iterate being the cyclic group C2. It has been proved that these transfinite automorphism towers always terminate. Here, however, we are only interested in isomorphism classes of groups, and finite iterates of the Aut operator, so for our purposes D8 is a terminal group (a group isomorphic to its automorphism group).

The next cyclic group unaccounted for, C21, also stabilises as a dihedral group, namely D12. It is more helpful to visualise this as the direct product of S3 and C2. Again, this is not a complete group, since it is not centreless. 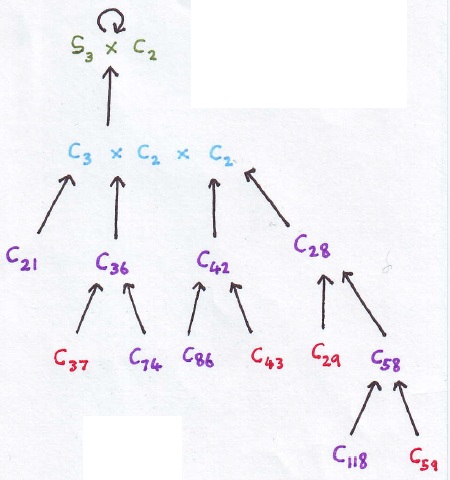 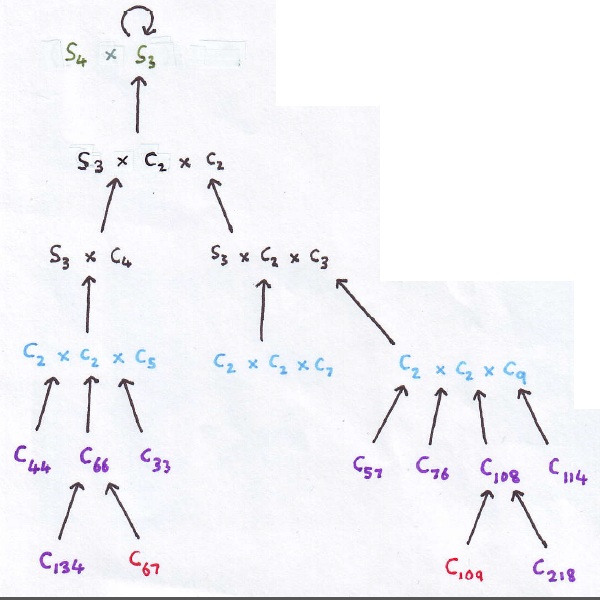 That group has order 32, and is generated by the twelve elements of order 4. Draw an edge between two of these elements if they do not commute with each other; the resulting graph is a pair of disjoint octahedra: 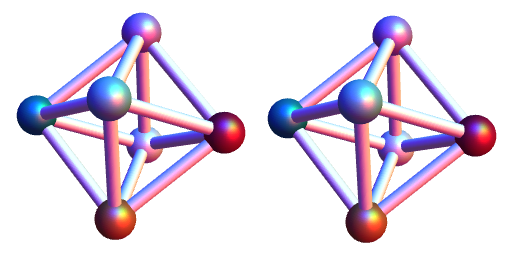 So, we have something vaguely similar to a direct product. It transpires that it’s actually the central product of Q8 with itself, obtained from the direct product by quotienting by the common centre (−1, −1). We denote this by Q8 * Q8. 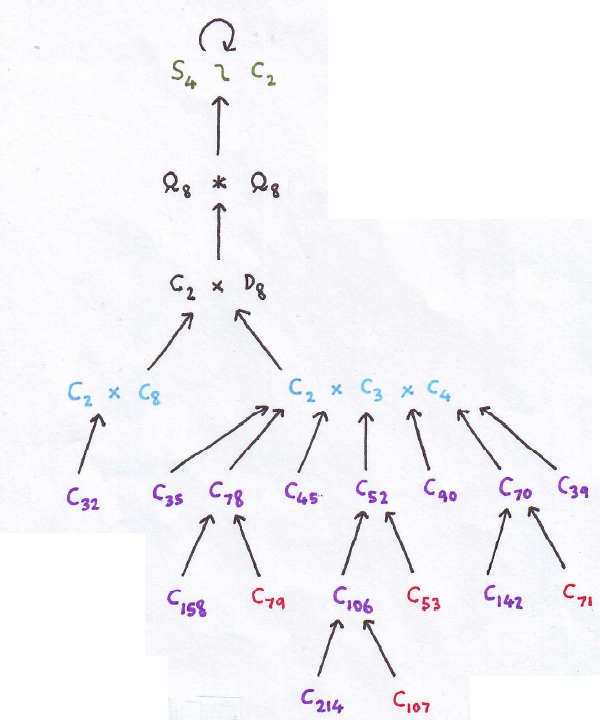 I suppose, at this point, I should explain what a wreath product is. I find that it’s rather intuitive to understand, and best explained by considering a few examples. Firstly, if we have a wreath product A wr B, it is necessary for B to act on a set X. We then define A wr B as acting on the set A^X (the set of ways to label the elements of X with elements of A), generated by the action of B permuting the elements of X, and the action of A^X on A^X by pointwise multiplication.

For example, C2 wr Z (where Z is the infinite cyclic group, acting on the integers by translation) is the lamplighter group, generated by translations of an infinite line of lightbulbs and by toggling any subset of the lamps.

As a challenge, try tracking the behaviour of the prime cyclic group C227. (Hint: you’ll need to know lots of four-dimensional geometry!) If you give up, it’s included on this beautiful colour-coded poster, along with many other groups.

If infinite growth is possible, it would be unsurprising if it is undecidable whether a generic finite group terminates or grows indefinitely. Indeed, it may even be possible that there exists an algorithmic procedure for converting a Turing machine into a group, which terminates under iteration of Aut if and only if the Turing machine halts. If this is the case, it is probably the most difficult Turing-complete programming language in existence.