The abbreviation TFAE (the following are equivalent) is often used in the statement of various theorems. Of course, a completely synonymous phrase would be ‘any one of these implies the other n − 1′. This then admits a natural generalisation to ‘any k of these together imply the other n − k‘. We shall refer to these situations as (n,k)-TFAE.

It is obviously possible to construct artificial examples for any k, such as the following set of statements:

However, these examples are completely boring, so we’ll just concentrate on more interesting examples instead. The case k = 1 is just regular TFAE, so the next thing to try is k = 2, i.e. ‘any two of these imply the others’. One such example is the new Mersenne conjecture, formulated by Bateman, Selfridge and Wagstaff:

Let p be an odd natural number (only interesting when p is prime). Then, any two of these implies the third:

These cases of ‘any two conditions imply the third’, or (3,2)-TFAE, are reasonably common. If P and Q are two finite sets, and f is a function with domain P and codomain Q, then any two of the following statements imply the third:

Obviously, the case where all statements are true corresponds to f being a bijection. Equally obviously, this does not hold in general if P and Q are allowed to be infinite. 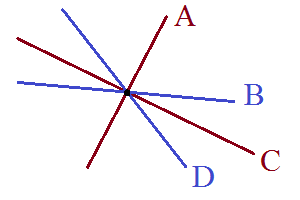 A more interesting example of (n,2)-TFAE, where there are four statements rather than three, is from Euclidean geometry. Suppose we have a pencil of four distinct lines passing through a common point, as shown above. Then, any two of the following statements together imply the other two: