V5 is the power set of V4, and is too large to embed into this post. Nevertheless, I’ve made a zipped text file (206 kB; decompresses to 8960 kB) containing V5 in all its glory. So, it’s small enough to store as a reasonably sized text file, and when compressed it even fits on a 3½-inch floppy.

V6 is a different story altogether. Whereas the observable universe contains about 10^79 atoms, V6 contains approximately

Continuing in this way, we get Vn for all positive integers n. Taking their union gives the countably infinite set Vω, which contains all sets expressible as finite strings of curly brackets and commas. More generally, if α is a limit ordinal, then we define Vα to be the union of Vβ for all β < α.

Now that we have the successor and arbitrary limit operations, we can reach arbitrary ordinals in this manner.

Taking the union over all Vα gives V, the von Neumann universe, or ‘collection of all sets’.

Instead of drawing curly brackets and commas, we can represent sets as closed curves, with their elements drawn within. Insisting that we draw them on a grid, with walls and gaps of width 1 (Chebyshev distance), here are diagrams of V0 to V4: 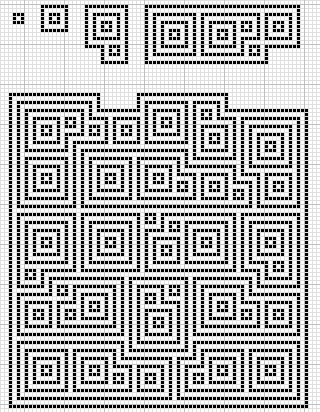 The representations of V0 to V3 are definitely optimal. On the other hand, I was somewhat disappointed that I couldn’t quite get V4 to fit in a 75 by 75 square (the overhang increases it to 75 by 79). This suggests a few exercises to the reader: