Several geometric problems and Diophantine equations can be converted into the task of finding rational points on elliptic curves. The canonical example is to determine for which rational numbers n can a right-angled triangle with rational side lengths have an area of n. (The integers with this property are called congruent numbers.)

Before we can proceed, it is helpful to find all pairs of rational numbers (a, b) such that a² + b² = c², where c is a predetermined rational number. Equivalently, we want to find rational points on the circle of radius c, which is reasonably trivial. It is well known that if one root of a quadratic equation with rational coefficients is rational, then so must the other one. In particular, this means that the rational points on the circle are precisely the points for which the line in the following diagram has rational gradient: 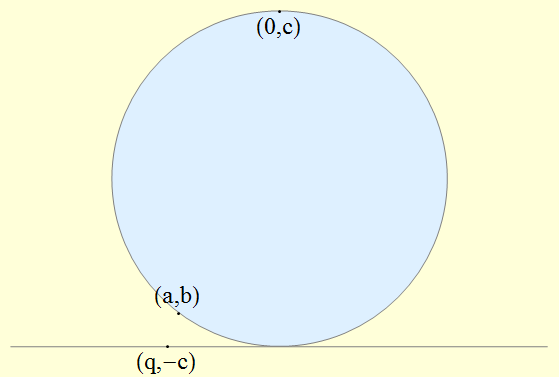 By geometric inversion in the circle with centre (0, c) and radius 2c, it is straightforward to derive that

. If you plot c and q on the complex projective plane, the resulting surface is a topological torus; it is said to have a genus (number of holes) of 1. This means that algebraic massage can convert it into an elliptic curve. Let’s attempt this. Firstly, we want a polynomial, so the obvious step is to eliminate the denominator:

For this to be in Weierstrass normal form, we want one side of the equation to be a square, and the other side to be a cubic function of a single variable. The right-hand side is almost a square itself, rectifiable by multiplying both sides by n³. Additionally, q and c are equidimensional, so we can do some further manipulation:

. It is easy to show that we can express q and c as rational functions of x,y,n, so rational points on this elliptic curve correspond to rational right-angled triangles with area n. Assuming the Birch and Swinnerton-Dyer conjecture, the existence of rational solutions can be verified by a finite calculation, so the congruent numbers are a recursive set. If the conjecture is false, however, then there is no known algorithm for computing the congruent numbers.