What should this group be called?

Consider the Riemann sphere, obtained by adjoining a ‘point at infinity’ to the complex plane. The conformal maps from the Riemann sphere to itself form a group, the Möbius group, which is abstractly isomorphic to

, although I’ll discuss that later). Douglas Arnold and Jonathan Rogness made an excellent illustrative video:

One way to construct the Möbius group is to embed it in a larger group generated by reflections in arbitrary lines and inversions in arbitrary circles, and to just take the index-2 subgroup of transformations that preserve orientation instead of reversing it. This is exactly analogous to the distinction between the orthogonal group and the special orthogonal group.

However, this larger group is interesting in its own right. But what should it be called? It can be thought of as ‘the group generated by Möbius transformations together with the field automorphism of complex conjugation’, and one would be very tempted to call this the projective semilinear group

In addition to complex conjugation, there are loads of silly field automorphisms of the complex numbers, obtainable by invoking the axiom of choice. Indeed, it’s a rather routine exercise:

Now, permutations of the generators give silly field automorphisms of the complex numbers. Hence, the projective semilinear group

is not just the Möbius group with reflections, but instead a ridiculously large group that we don’t care about.

These pathological automorphisms actually lead to some pathological geometric transformations of the complex projective plane, as described in a fascinating paper. These transformations map lines to lines, circles to circles, conics to conics and so on, yet are spectacularly discontinuous.

Hyperbolic geometry and the Lorentz group

Consider spacetime with one temporal and two spatial dimensions. It looks something like this: 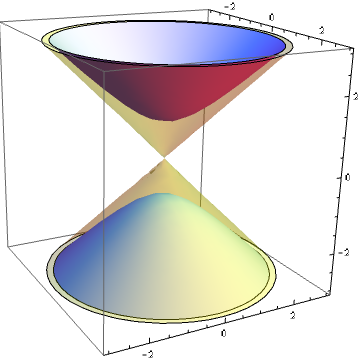 From the perspective of the centre of the cone, the hyperboloid looks like an open disc. The orthochronous Lorentz transformations precisely correspond to distance-preserving transformations of the hyperbolic plane. These are themselves determined uniquely by a conformal (or anticonformal) transformation of the ‘circle at infinity’.

Moreover, this nicely generalises: the group generated by geometric inversions on the n-sphere is abstractly isomorphic to the orthochronous Lorentz group

. And when n = 24, we get a very beautiful discrete subgroup, namely the automorphism group of the II(25,1) lattice intimately related to the Leech lattice.

0 Responses to What should this group be called?