Suppose we have a circular track occupied by finitely many trains of various lengths travelling at the same speed. The trains collide elastically with each other. If the sum of the lengths of the trains is a rational multiple of the track length, then it can be proved that the trains will eventually return to their original configuration. Here’s an animated GIF I prepared earlier:

It’s actually quite fun to prove that the system is periodic (there is a very short elementary proof, but you have to think outside the box). I’ll leave this as an exercise to the reader, and possibly give a solution in about a week or so, when you’ve had sufficient time to think about it. If you find a proof, include it in the ‘comments’ section at the foot of this page.

Now for something completely different and not at all related: solitons. Solitons are stable localised waves which propagate at a constant speed, and occur as the solutions to certain partial differential equations (e.g. the Sine-Gordon equation). When two solitons collide, they temporarily interact and pass through each other, eventually (in the limit as the elapsed time tends to infinity) recovering as if there were no interaction. Indeed, this could be given as a somewhat convincing answer to the question ‘what happens if an unstoppable force meets an immovable object?’.

It has been proposed that soliton solutions to the Sine-Gordon equation may be used to propagate impulses of information at sub-neuronal scales in cellular structures called microtubules. More information is available in D. D. Georgiev’s paper on the subject. More elaborate soliton interactions are possible, such as this collision between an antikink and a standing breather:

A much more artificial example of this type of reaction is Dave Greene’s Heisenburp device in Conway’s Game of Life, where a glider (moving localisation) collides with a complicated arrangement of machinery, which sends a fast neuronal impulse along a diagonal wire (much more quickly than the glider could have travelled in vacuo) to a receiver arrangement, which subsequently replaces the glider in exactly the same position and phase it would have occupied had the machinery not been present. 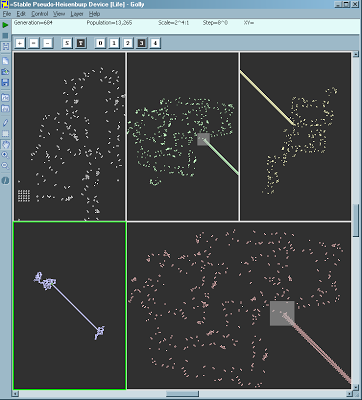 As is visible above, the device resembles a myelinated neurone, both in layout and function. Unlike actual neurones, however, this arrangement is incredibly fragile (and can be broken, for example, by sending two gliders in quick succession, or a glider along a different lane). Indeed, configurations in Conway’s Game of Life, at least on small scales, are the antithesis of solitons — the smallest perturbation can cause chaotic devastation.

Solitons also occur in both fundamental particle physics and in fluids, as explained in this video of David Tong having a bath:

These vortex ring solitons also support more interesting interactions. It is possible to project a faster vortex ring through the centre of a slower one, causing them to ‘leapfrog’ over each other. I seem to recall this being the subject of a talk at the Trinity Mathematical Society, but cannot remember the title of the talk. Nevertheless, a quick search found a YouTube video showing a simulation of vortex rings exhibiting this type of behaviour:

16 Responses to Solitons and trains