The second round of the British Mathematical Olympiad was marked today; results are available from Joseph Myers’ website. Congratulations to everyone who featured on the leaderboard (especially Linden Ralph, who secured first place). Moreover, best of luck to the recently-appointed EGMO team of Olivia Aaronson, Kasia Warburton, Eloise Thuey and Katya Richards.

In other news, Ivan Fomichev and Dave Greene have been working on building a 31c/240 spaceship in Conway’s Game of Life, using a similar principle to the (rather massive!) 17c/45 Caterpillar constructed by Gabriel Nivasch, David Bell and Jason Summers. Nivasch has written an excellently descriptive article about it, which I suggest reading before proceeding to familiarise yourself with the concepts and terminology.

Fortunately, the 31c/240 model is likely to be considerably smaller than its predecessor. In particular, the slow speed facilitates alternative mechanisms such as this one (henceforth referred to as Design II, to contrast with Design I used in the 17c/45 Caterpillar), where streams of gliders from the back catch up with the front to stabilise the behemoth: 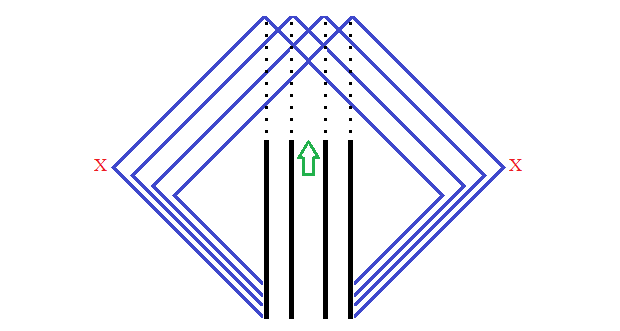 (This would have been impossible for the 17c/45 caterpillar, since the vertical component of the velocity of a glider is only c/4, which is slower than the spaceship’s speed of 17c/45; consequently, c/2 orthogonal spaceships were necessary instead.)

Dave Greene has built a complete front end based on Design II, and Ivan Fomichev has done the same for Design I (including constructing a helix). Note the red ‘x’ in the diagram, where forward gliders must be reflected inwards to stabilise the front; this presents an additional engineering problem. In fact, there are two suggested solutions:

It is universally acknowledged that IIb is more practical than IIa, so the current effort is to realise it. All of the individual components have been designed, so it is simply a matter of assembling them into a functional spaceship.

Do there exist smooth manifolds S and T which are homeomorphic but not diffeomorphic?

Amazingly, the answer is yes, as proved by John Milnor in the case where S is the 7-sphere (boundary of an 8-ball), in which case T is called an exotic 7-sphere. There are 27 of these beasts, which (together with the ordinary 7-sphere) form an order-28 abelian group (indeed, the cyclic group C28) under the operation of connect-sum.

It is an open problem as to whether there exist exotic 4-spheres. There are, however, exotic versions of

, a phenomenon that occurs in no other dimension. Indeed, the situation is much scarier than the compact case of 7-spheres: there are uncountably many non-diffeomorphic smooth structures on four-dimensional space!