Rectangular hyperbolae and the orthocentre

Firstly, a major announcement: Maria Holdcroft (whom you may remember from the cipher solvers page) and I will be performing a charity skydive on the 2nd April! If you wish to sponsor us, please specify the amount you intend to donate by commenting either on the Facebook event page xor at the bottom of this article. All donations will go entirely to the remarkably-efficient Schistosomiasis Control Initiative (which saves approximately one life per £0.50 GBP or $0.83 USD).

In an arbitrary triangle ABC, the orthocentre H is the unique intersection point of the three altitudes (lines passing through one vertex and perpendicular to the opposite side). This is unsatisfactory as a definition, since we haven’t yet proved that the point exists. However, it is perfectly valid to define the orthocentre as such:

The orthocentre is the intersection of the altitudes from A and B. 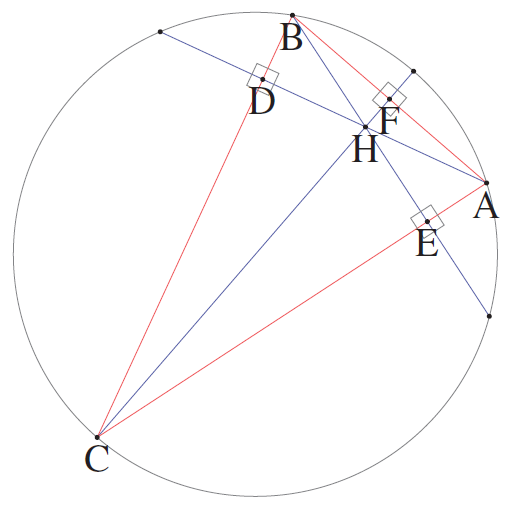 We wish to prove that CH is perpendicular to AB. There is a rather short proof using synthetic Euclidean geometry, although it’s rather boring. Instead, we can use algebraic projective geometry to prove the following more general statement, and then recover the concurrency of the altitudes as an immediate corollary:

A conic passing through A, B and C is a rectangular hyperbola if and only if it also passes through H.

where A, B, C, D, E, F are not all zero. A conic is degenerate if it can be factorised into two linear terms, in which case it is the union of the corresponding lines. If A, B and C are all zero, then the equation z = 0 (the line at infinity) is a factor.

We can think of these equations as vectors (A, B, C, D, E, F) in a six-dimensional vector space. Scalar multiples of a given vector all represent the same curve, so the space of conics is actually a five-dimensional projective space. However, it is more convenient to work in the vector space than the projective space since we have extra structure, namely the operations of addition and scalar multiplication.

Observe that for any point P = (x, y, z), the constraint ‘the conic passes through P’ is a linear equation in A, B, C, D, E, F. Hence, the pencil of conics passing through a given point form a five-dimensional vector subspace (or a four-dimensional projective space of curves).

Consequently, the space of conics passing through A, B, C and H is a two-dimensional vector subspace. We would like to show that the space of rectangular hyperbolae passing through A, B and C is also a two-dimensional vector subspace, which would follow from being able to express ‘the conic is a rectangular hyperbola’ as a linear equation in A, B, C, D, E, F.

A rectangular hyperbola is defined to be a hyperbola whose asymptotes are perpendicular. Since we only care about the direction of the asymptotes, we can determine whether a hyperbola is rectangular simply by where it meets the line at infinity z = 0. Consequently, it suffices to throw away any terms containing a z, so we get a simpler ‘asymptotic’ equation of the conic:

If we express this as a product of two lines through the origin, (Px + Qy)(Rx + Sy) = 0, then the perpendicularity of the two lines means that P/Q = -S/R, or PR + QS = 0. Expanding out, this translates to the very simple linear condition A + C = 0. Consequently, rectangular hyperbolae through A, B and C indeed form a two-dimensional vector subspace.

They are clearly different conics, so the equations are not scalar multiples of each other and therefore are linearly independent. This completes the proof.

A relevant fact is that the locus of centres of the hyperbolae passing through A, B, C and H is the nine-point circle of ABC. Again, with the machinery in place, this is not too difficult to prove. The centre of the conic is the point such that ∂Γ/∂x = ∂Γ/∂y = 0, so it is the intersection of the lines 2Ax + By + Dz = 0 and Bx + 2Cy + Ez = 0.

Since A + C = 0, it is easy to see that the two aforementioned lines are perpendicular. Also, the linear equations in A, B, C, D, E, F mean that each of the two families of lines (as the hyperbola varies) have a common point. Consequently, we can describe the locus of centres of hyperbolae as the locus of intersections of lines l1 and l2 such that l1 passes through P1, l2 passes through P2, and l1 is perpendicular to l2. We know by Thales’ theorem that this describes a circle.

Interesting examples of such hyperbolae

Recall that five points in general position determine a conic, since they correspond to five linearly independent constraints and thus fix a one-dimensional subspace (which contains a single conic). Hence, if we specify a fifth point in addition to A, B, C and H, we get a unique rectangular hyperbola. This is particularly interesting when the fifth point is a triangle centre. Examples include:

1 Response to Rectangular hyperbolae and the orthocentre