Until very recently, the densest known packing of pound coins in the plane was the hexagonal lattice packing of circles, which achieves a density of π/√12 ≈ 0.9069. This was proved by Axel Thue to be the densest arrangement of points subject to the constraint that the minimum distance between any pair of points is d.

However, recently a new method of packing pound coins has been realised, which attains a marginally increased density of 4√3 − 6 ≈ 0.9282. Specifically, we take the following packing of dodecagons induced by the truncated hexagonal tiling: 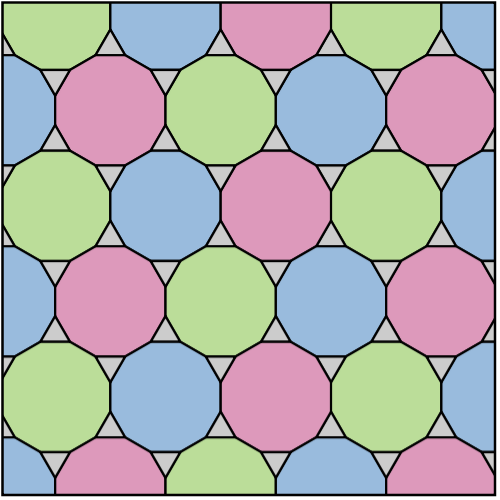 This increased density is a consequence of a new dodecagonal pound coin being introduced, and not that there is a denser packing of circles (which is, of course, impossible). The coin has been designed on the basis that it is considerably more difficult to forge, and rather satisfyingly still includes one of the earliest anti-counterfeiting precautions: Isaac Newton’s milled edge.

Apparently there is a competition to decide the obverse design of the coin; maybe we could deliberately design and submit something with an even more subtle fundamental flaw than the famous gear train parity error of the two pound coin? It would be absolutely hilarious if we manage this. I feel that an overbalanced wheel or other perpetual motion machine would be too obvious, but an impossible cube with a portcullis on one face might just get past the quality control process…

(This is also the first recent British coin to lack a constant diameter, and will therefore necessitate a major overhaul of all coin-recognising machines.)