Firstly, the results for the Balkan Mathematical Olympiad have been published. Consequently, the preliminary UK IMO squad is now larger than ever before, comprising ten people (six team members and four reserves, in some indeterminate order).

You are probably aware of the game of Noughts and Crosses (alternatively referred to as tic-tac-toe), in which one attempts to seize three collinear squares whilst attempting to prevent one’s opponent from doing likewise. What is less well-known, albeit mentioned in the Royal Institution Christmas Lectures several years ago, is that it’s entirely equivalent to the following problem:

We begin with the numbers {1, 2, 3, … 9}. Players alternate turns, taking an available (unclaimed) number. The first player to obtain three numbers which sum to 15 is declared the winner.

To demonstrate their equivalence, it suffices to show that we can label the squares from 1 to 9, inclusive, such that every sum to 15 corresponds to a unique line, and vice-versa. This is accomplished by the following magic square:

It is immediate from the definition of the magic square that all lines (sets of three collinear squares) consist of three distinct numbers in the range {1, 2, …, 9} summing to 15. What is less obvious is the converse, that every such set is represented by a line. I only just realised the real reason behind this, which hitherto seemed to be a mere coincidence. Firstly, we decrement each of the numbers by 5, so that all line sums are zero. 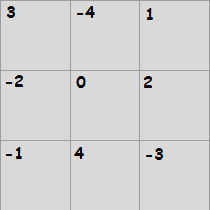 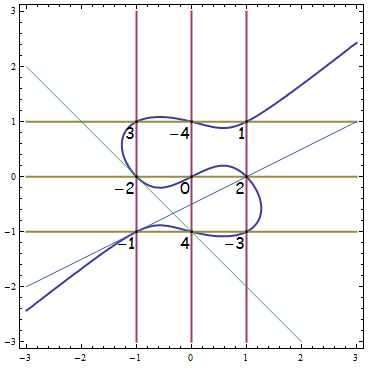 Anyway, generalising this idea, we can show that the following two games are equivalent:

By looking through the Elliptic Curves on a Small Lattice, I found a game of Generalised Noughts and Crosses on a reasonably small grid corresponding to the game where you attempt to form a total of 27 from three numbers in the range {1, 2, 3, …, 17}: 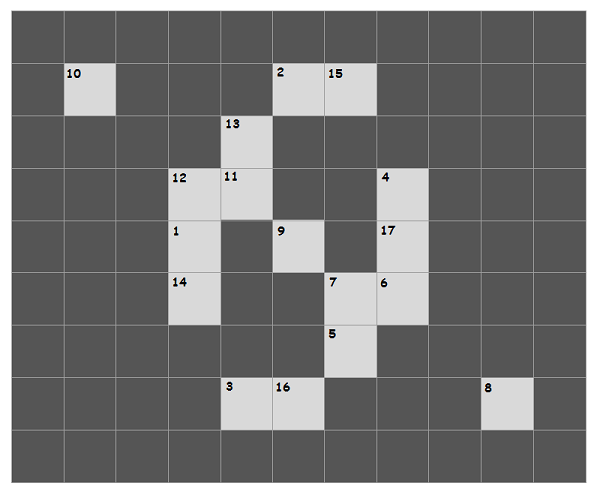 You can verify for yourself that sets of three collinear squares are in bijective correspondence with sets of three numbers in the range {1, 2, …, 17} summing to 27.