Ilkka Törmä and Ville Salo, a pair of researchers at the University of Turku in Finland, have found a finite configuration in Conway’s Game of Life such that, if it occurs within a universe at time T, it must have existed in that same position at time T−1 (and therefore, by induction, at time 0). Here is the configuration of live and dead cells, surrounded by an infinite background of grey “don’t care” cells: 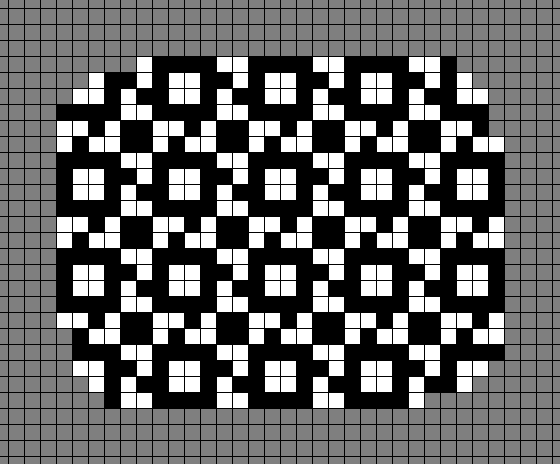 The configuration was discovered by experimenting with finite patches of repeating ‘agar’ and using a SAT solver to check whether any of them possess this property. Similarly, one can use a SAT solver to verify that Törmä and Salo’s result is correct.

Since this configuration can be stabilised (by the addition of further live cells, shown in yellow) into a finite still-life, this demonstrates that not every still-life can be constructed by colliding gliders. 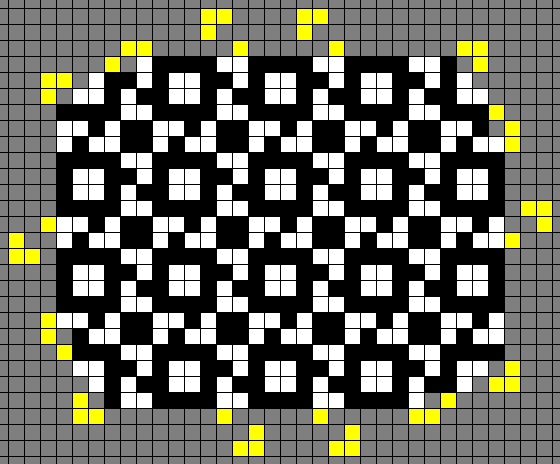 The first finite stabilisation was 374 cells, but this was promptly reduced to 334 cells by Danielle Conway and then to the 306-cell configuration above by Oscar Cunningham. Oscar moreover proved, again using SAT solvers, that this is the minimum-population stabilisation of the Törmä-Salo configuration.

Consequently, we have the following pair of bounds:

The things buildable by gliders (an idea I think first popularized
by Buckingham) are a nice class, mainly because they are provably of
infinite “age” (at least if you define them correctly). I’m sure we
should NOT believe, however, that everything of infinite age is so
buildable (even if most of us do). I expect that there is a still life
of such delicacy that in some essential sense it is its only ancestor –
though obviously that sense must allow for fading configurations outside
it, and probably allow for more.

Indeed, is there a Godlike still-life, one that can only have existed
for all time (apart from things that don’t interfere with it)? I like
this one! I imagine it might be findable too, by a version of the searches
that found the old orphans (gardens-of-eden), but restricted to still-lifes.

Well, I’m going out to get a hot dog now, so will stop this. It was
originally intended to be only a very much shorter thank-you note, and so
was addressed only to you – please circulate it if you like. JHC

The construction also implies a solution to the generalised grandfather problem: a pattern which has an N-tick predecessor but not an (N+1)-tick predecessor. The diameter of such a pattern grows like Θ(sqrt(log(N))).

Previous results were known for small values of N (N=0 by Roger Banks, and N=1,2,3 by mtve). Recently Törmä and Salo settled the problem for all positive integers, but the diameter of the pattern implied by their proof grows like Θ(N). A few days later they discovered the pattern in this post, which implies the stronger (and indeed optimal up to a constant factor) result above.