Knot theory is a branch of topology which considers the different embeddings of a cycle into three-dimensional Euclidean space, R^3. The simplest type of knot is the unknot, which is just an ordinary circle (which can be ‘thickened’ to form a torus):

The second simplest knot, the trefoil knot, is obtained by doing a bog-standard knot in a piece of string and connecting the ends. It took a surprising amount of work by topologists to show that the trefoil knot and unknot are distinct. The usual way to show that two knots are not equivalent is to develop some kind of invariant which is preserved when you do elementary operations (known as Reidemeister moves) to a planar drawing of a knot.

A few minutes ago I discovered that it’s possible to create a cycle (walk which visits no vertex more than once, except the start/end vertex) in Z^3 (three-dimensional integer lattice) with the following properties:

The cycle is a beautiful beast I’ve named the Treefoil, inhabiting a 9 × 9 × 9 box. You can see the three projections and a three-dimensional perspective view below: 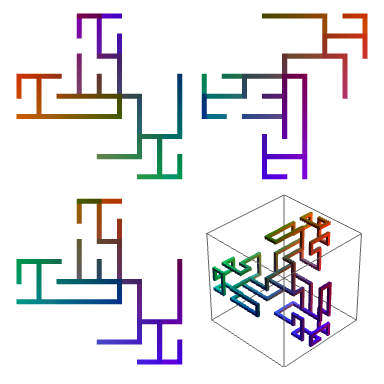 Here is an isometric projection of an earlier version (11 × 11 × 11), which I since optimised to give the variant above. 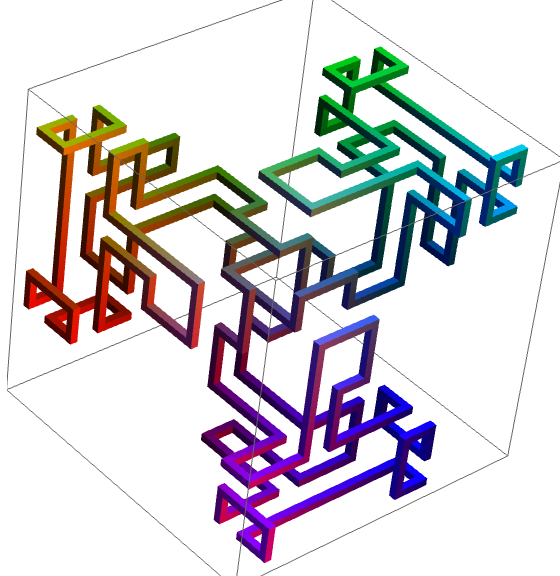 For quite a while, a few people contemplated as to whether property 1 could be achieved. John Rickard, triple IMO gold medallist, was responsible for discovering the first example (the uniquely minimal solution). The problem featured on Professor Imre Leader’s More Introductory Problems sheet (question 9) and in the book Mathematical Mindbenders (by Peter Winkler), where a detailed history appears.

Note that every cycle in Z^3 satisfying property 1 yields a Borromean string with no balanced substring, and the converse is also true.

Much less beautiful (but almost as interesting) is a pair of interlinked cycles, such that the projections of the resulting Hopf link are all trees: 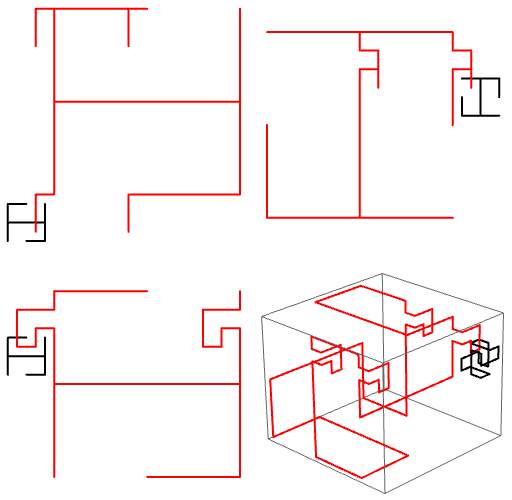 The Hopf link is so named because it features in the Hopf fibration (all great circles are linked in this manner). It’s not the only example of a pair of linked unknots; there are countably infinitely many, including the Whitehead link (the logo of the International Mathematical Olympiad).