This is the final article on fast-growing functions. In the first two articles we looked at computable functions, up to and including Friedman’s TREE function. The third article described the Busy Beaver function, which eventually overtakes all computable functions. This article will explore oracle Turing machines, Rayo’s number and ultimately give a inconceivably fast-growing function Ξ, such that Ξ(10^6) far exceeds any number anyone has yet defined. 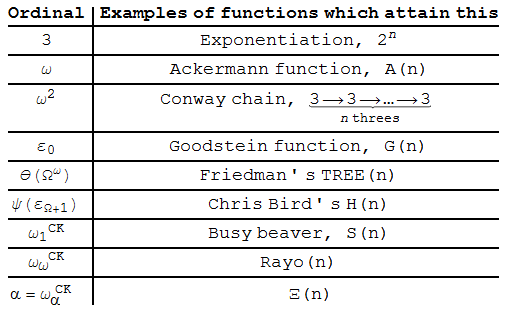 There is no need to stop there; we can define third-order Turing machines and so on. The kth-order Busy Beaver function S_k gives us the ordinal ωkCK.

If we can represent Turing machines of arbitrary order in a specific notation, it’s possible to define a function with growth rate corresponding to the ordinal ωωCK. The most elegant approach, considered by Rayo, was to use first-order logic as an alternative to Turing machines.

In first-order logic, we have a set of symbols:

For instance, Lagrange’s four square theorem can be written as ∀n:(∃a:(∃b:(∃c:(∃d:((a×a)+(b×b)+(c×c)+(d×d) == n))))). The busy beaver function can be expressed in first-order logic, as can any of the higher-order busy beaver functions mentioned above.

Rayo’s function Rayo(n) is defined as ‘the largest integer expressible uniquely by n symbols in first-order logic’. It must necessarily be ωωCK, since it can be bounded above by the diagonal sequence of nth-order Busy Beaver functions, but dominates any fixed-order Busy Beaver function. Rayo used his function to define a very large number, Rayo(10^100), to win a competition. We’re now going to use a third model of computation, combinatory logic, to absolutely annihilate this record.

Combinatory logic uses the idea of combinators, which are functions mapping combinators to combinators. We usually use three primitive combinators, namely I (identity function), K and S. Applications of combinators can be represented as a binary tree, where the function is on the left and the argument is on the right. The ‘rules’ for applying I,K,S are displayed below: 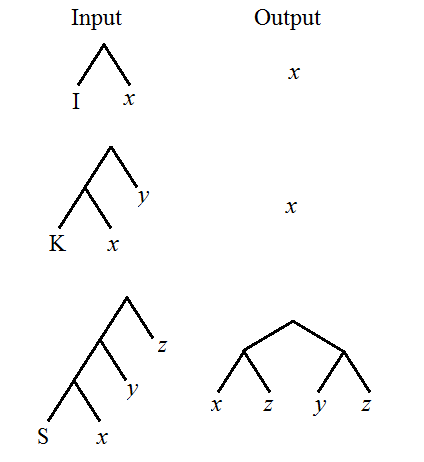 The process of taking the leftmost combinator in a tree and applying the respective rule is known as beta reduction. Some things eventually β-reduce to give the identity combinator. An example of this is the following tree: 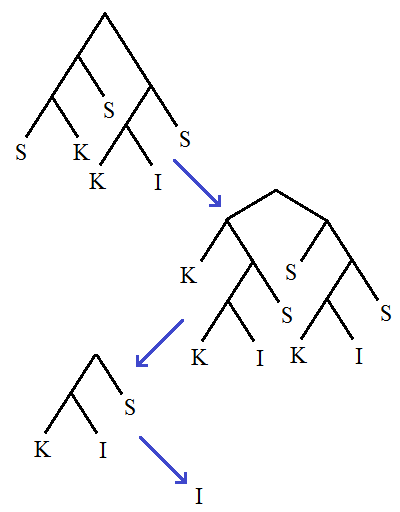 Some trees do not reduce to the identity combinator. We say that this particular one has an output of size 2; this is the number of leaf nodes in the final stage of the β-reduction before it reaches a state where we can β-reduce no further. 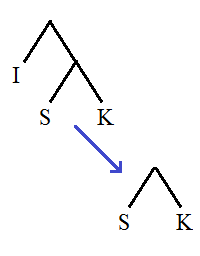 And there are those which grow infinitely: 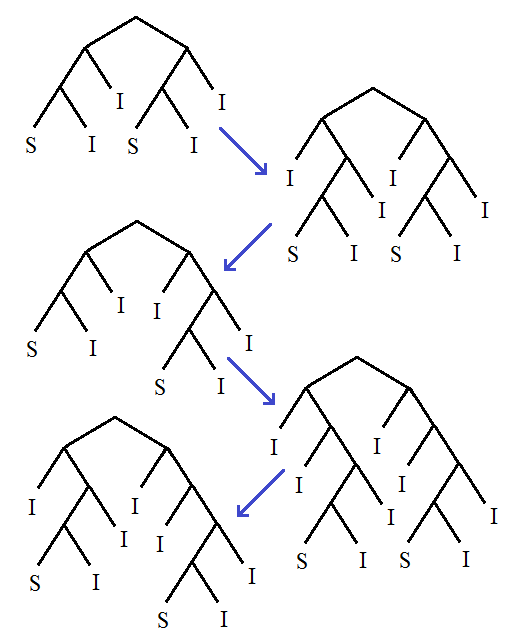 With these three combinators, it’s possible to emulate Turing machines. We can represent natural numbers with functions known as Church numerals and perform arithmetic and logical operations. Recursion and iteration are also possible in this system.

Trees of SKI combinators are no more powerful than Turing machines. Nevertheless, we can actually strengthen it considerably by introducing a new super-combinator, the oracle combinator Ω. This accepts three arguments, and returns the second argument if and only if the first argument β-reduces to I, and returns the third argument otherwise. Here is a visual depiction: 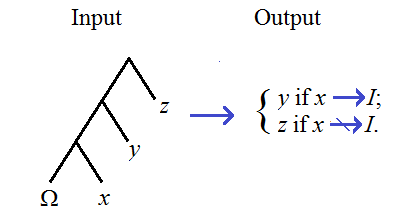 It’s possible to define paradoxical, nonsensical, self-referential statements. We’ll remove this contradiction by being careful and only concentrating on well-founded trees. Firstly, trees consisting entirely of S, K and I are called ‘rank 0’. If, in the sequence of beta-reductions of a tree T, we only have to apply Ω to trees of rank less than the ordinal α, then we say that T has rank α. Trees with ranks are known as well-founded, as the definition resembles that of a set obeying the axiom of foundation (and thereby inhabiting the von Neumann universe).

We can build a rank-2 tree capable of computing the Busy Beaver function. We can also build existential and universal quantifiers using the oracle combinator, so a n-quantified expression in first-order logic can be evaluated by a rank-(n+1) tree. Hence, using a rank-ω tree, we can compute Rayo’s function. It shouldn’t be too difficult to imagine this requiring far fewer than 10^6 combinators.

I define my function, Ξ(n) to give the size of the largest output of a well-founded tree of n combinators. Consequently, Ξ(10^6) is inconceivably larger than the largest number defined before, namely Rayo(10^100). If you look at the ordinal table at the top of the page, you’ll see how much faster Ξ is than Rayo’s function.

If you add another oracle combinator, Ω’, capable of testing whether an expression is well-founded, then we can compute the Ξ function and much more. The variant of Ξ defined for the combinatory logic defined using {S, K, I, Ω, Ω’} is called Ξ_2, and has an even faster growth rate. You can continue adding further oracle symbols to obtain even faster-growing functions. I’m not going to bother doing this, though, since it’s really quite pointless as we have already broken the record.

0 Responses to The Ξ function