As promised, here is the remainder of the proof of the Turing-completeness of three-dimensional chess. In the first part, we introduced the rules; in the second part, we built structures to function as logic gates and wires.

Instead of a Turing machine, I shall describe how to implement an alternative (equivalently universal) model, known as a counter machine. This is a finite state machine connected to a finite number (three is usual, but two is also sufficient) of registers, each of which can store a natural number. The finite state machine can send signals to increment and decrement the value of the register, and to test whether the register contains 0.

A more comprehensive description of a Minsky Register Machine (MRM) is included on Paul Chapman’s website, where he has built an implementation in Conway’s Game of Life. He uses sliding-block memory, developed by Dean Hickerson, where the position of a block represents an unbounded natural number. I have to admit that my design for a MRM in three-dimensional chess is directly inspired by Chapman’s implementation.

The storage of positive integers uses a similar principle. The natural number is stored in the vertical position of a black king. Being able to increment and decrement the king with only finite support is non-trivial, and almost certainly the most difficult implementational detail. The key idea is to confine the black king to a helix, like so: 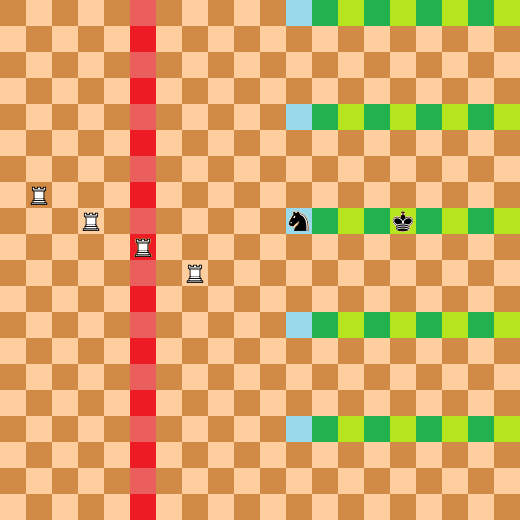 The white rooks are responsible for restricting the motion of the black king. Each rook is confined to a vertical column (shown in red); I’ll explain later how this is accomplished. The black knight is confined to two columns in the yz-plane, which ensures that the only positions on this xz-plane that it can occupy are those shown in light blue. The knight has the ability, therefore, to protect the king, provided he occupies a particular modulo-4 residue.

In other words, the black king can only occupy the squares highlighted in green. By including four copies of this mechanism, each screw-rotated by pi/2 and translated vertically upwards by one unit, we can restrict the black king to a helix.

Restricting the motion of rooks and knights

This mechanism would operate as the basis for a functioning sliding-king memory, assuming we can restrict the motion of the white rooks and black knights as described. Since this detail is quite difficult, I’ll explain precisely how this is accomplished. We’ll start with the white rooks. It’s easiest to explain this with a diagram:

The white rook (light green cube in the diagram) is pinned by the black rook immediately below it. The white king cannot move from its vertical column, lest it would be threatened by the eight surrounding black rooks. A fortress of pawns protect the white king from any attacks by rogue rooks; the king and pawns can move upwards to extend the reach of the rook.

The nine black rooks should actually be virtual rooks, emulated by a rook cage (nonplanar hexagon of mutually pinning rooks) as described in the previous article.

It is more difficult to control the black knights, since we need to restrict them to two vertical columns as opposed to just one. Equivalently, this reduces to preventing the black knights from landing on any of the sixteen columns shown in red in this horizontal cross-section: 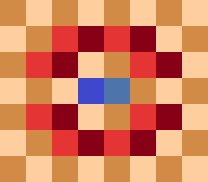 To accomplish this, we have white rooks positioned directly below these columns, able to kill the knight if it enters one of them. We also have a black rook immediately below the white rook, able to destroy the white rook as soon as it moves (so as to prevent the rook from escaping) but not beforehand (as that would enable a defending white pawn to capture the black rook, resulting in a discovered checkmate). Using extra circuitry, it’s possible to ensure that checkmate occurs unless the black rook returns to its original position on the following move.

Together with the fixed circuitry from the previous article (diodes and transistors), we can build a Turing-complete counter machine, proving that three-dimensional chess is itself Turing-complete.

There are still some unsolved problems:

I believe that the answers to all of these questions are ‘yes’, but they are probably more difficult than this proof that three-dimensional chess is Turing-complete.

0 Responses to 3D chess is Turing-complete