Assuming everything has gone to plan, I am now introducing myself at the British Mathematical Olympiad training camp at Trinity. I’ll be assisting the future IMO team by making tea and providing biscuits (integral, if somewhat overlooked, roles in the administration of the camp), marking selection tests and promoting the use of transfinite induction, Muirhead’s inequality, and poles and polars.

Suffice it to say, I won’t have internet access for the next few days. As such, the posts you’re viewing have been written by me several days before, and have been set to automatically appear at predetermined times. 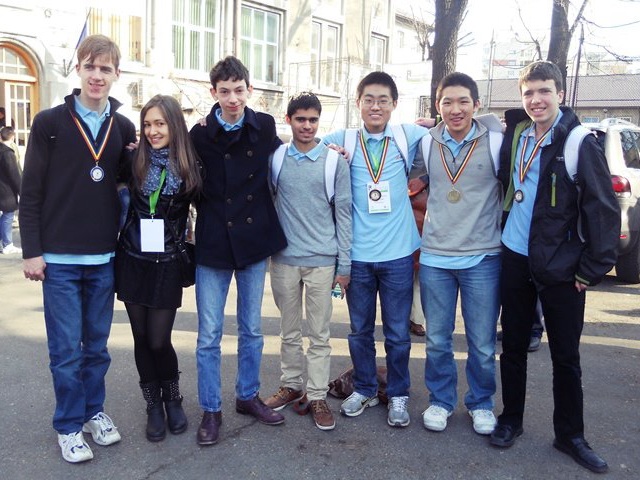 The British RMM team, and one of the guides. From left: Andrew, Silvia, Gabriel, Sahl, Daniel, Warren and Matei.

Also on the topic of UK olympiad training, Matei Mandache has written a very readable report about his experiences in the sixth Romanian Masters of Mathematics (whence the above photograph was taken). He has continued the very admirable tradition of mentioning me in student reports of competitions in which I didn’t compete.

I would, however, like to mention a single erratum (even if it may seem hypocritical, with my own report containing such howlers as ‘IMO stationary’ and ‘the Delhi Brassiere’!). Where he says ‘as they plan to be guides again, there is a good chance Gabriel or Warren will see them again, but for the rest of us the goodbye is final’, I have to disagree. At least one of the guides is intending to matriculate at Cambridge. Rather in the style of Douglas Adams, who didn’t immediately reveal who bruised his or her upper arm in The Hitchhiker’s Guide to the Galaxy, I shall not reveal to which of the four guides I am referring, thereby retaining an element of suspense…

If you’ve been affected by any of the issues in this post, you may want to take a look at MODA.