This is breaking news, by the way; hence, the article is somewhat rushed. (If you haven’t heard of Conway’s Game of Life, there is a summary on Wikipedia.)

As of a few minutes ago, Mike Playle discovered a π/2 stable reflector with a recovery time of 43 generations, which is an order of magnitude faster than its competitors. Here it is in the form of the first period-43 oscillator; it can be trivially modified to yield any period ≥ 43 (including 53, which hadn’t been attained until now). 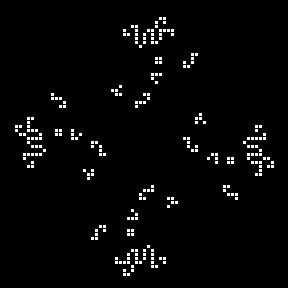 Due to the small size of 19 × 23 pixels, he wins a prize of $100 from Dave Greene, which had remained unclaimed for twelve years! Similarly, the fast recovery time of 43 generations earns an additional $100 from Matthias Merzenich. It appears that Ed Pegg’s prize puzzle page needs updating to reflect (no pun intended!) this discovery.

Coincidentally, the beta of Golly 2.5 has also just been released.

Also recent, but not quite as recent, was Josh Ball’s discovery of a tiny c/7 spaceship. There are now nine orthogonal spaceship velocities, summarised in this infographic I prepared earlier (note the Ford circles): 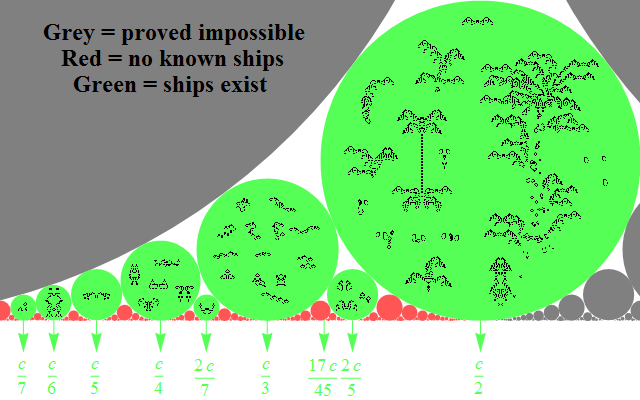 Dave Greene, Hartmut Holzwart and I are currently involved in the process of engineering a 31c/240 spaceship, so that might be appearing reasonably soon. It is likely to be rather large, though.