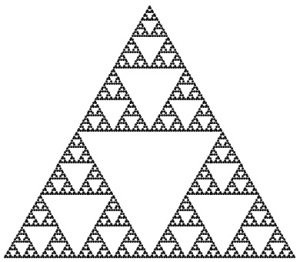 Essentially, it consists of three identical copies of itself, scaled by a factor of ½. This means that any reasonable definition (e.g. Hausdorff) gives the dimension of the Sierpinski triangle as

. We can ask more detailed quantitative questions  about the Sierpinski triangle:

This is quite an easy one, actually. If a Sierpinski triangle of mass m and side length l is rotated about an axis passing normally through its centre, dimensional analysis shows that the moment of inertia is given by

for some dimensionless quantity k.

Using the recursive definition of the Sierpinski triangle and invoking the Huygens-Steiner theorem (you may know this as the parallel-axis theorem), we get a relation which can then be rearranged to give

. So, the moment of inertia is simply

From this, it is trivial to find the average squared distance between two points:

Finding the mean (unsquared) distance between two randomly-chosen points is much more non-trivial, and the result is due to Andreas Hanz. It transpires that the mean distance is

, and the variance of the distance is

. These results were determined by taking the limit (as the number of discs tends to infinity) of the (normalised) mean distance between two randomly chosen configurations in Tower of Hanoi puzzle.

This is an obvious generalisation of the Sierpinski triangle. It is, however, easier to construct: Let x,y,z be real numbers (which are not dyadic rationals) in the interval [0,1]. Then, (x,y,z) is in the Sierpinski tetrahedron if

, where that operator XORs each bit of the binary expansion of the numbers. From this construction, it is easy to deduce that the Hausdorff dimension is precisely 2. 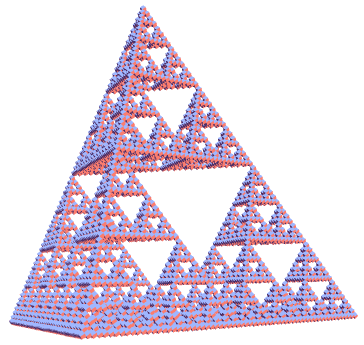