This was inspired by a discussion with James Aaronson outside the Chapel. We were contemplating group theory and automorphisms (specifically, trying to determine whether there exists a group of size strictly larger than

with only two automorphisms), and eventually considered the following question:

What happens if you begin with a group G, and iteratively apply the ‘automorphism group’ operator?

The next case is C8, which has no primitive roots. Its automorphism group is the Klein 4-group, C2 × C2. Since it is the additive group of a vector space over F2, the automorphism group is the group of linear maps (2 × 2 invertible matrices over F2 with linearly independent columns). It is not too hard to show that this is isomorphic to S3 (symmetric group with 6 elements), and that the direct sum

has the general linear group GL(n, p) as its automorphism group.

Most symmetric groups (the exceptions being n = 2 and n = 6) are their own automorphism groups. The next few cases, such as D8 and Q8, are included in the diagram below: 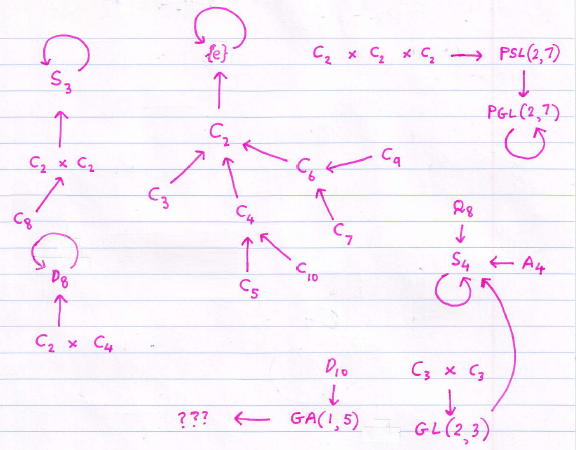 As the size of the group increases, these become difficult to compute.

This is discussed in further detail on Math Overflow.