Part IA of the Mathematical Tripos is marked in a rather interesting way. A naïve computation of the maximum score is 1120, although it is (in principle) possible to achieve absolutely any score (it need not even be a real number!). Firstly, let’s have a look at the scoring system:

The alphas and betas are subsequently converted into marks according to the following scheme (quoted from the schedules of the Mathematical Tripos): 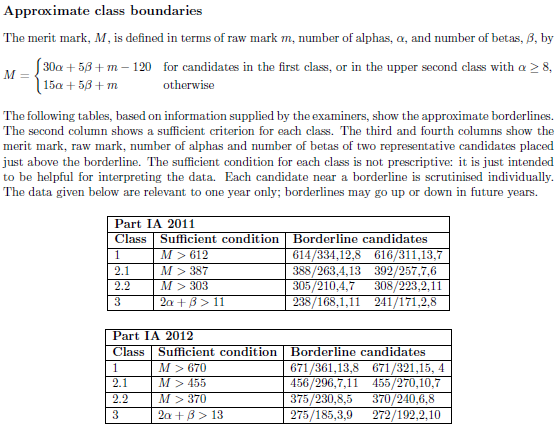 The −120 is generally referred to as an alpha tax, and cannot hurt you if you score eight or more alphas. However, if you score seven or fewer alphas and still get a first, you are actually penalised by the alpha tax. Suppose Miranda scored the following marks in 2012 (when the threshold for a first was 670):

Then, she would have a raw mark m = 470, together with 5 alphas and 31 betas. Now, each of the following two implications are perfectly valid:

In other words, we have a paradoxical inconsistency! Consequently, Miranda could then apply something called the Principle of Explosion, exploiting the fact that any valid proof is taken to be perfectly correct in the Tripos. Specifically, she makes the following sequence of deductions:

Essentially, the Principle of Explosion states that if a proposition and its negation are both true, then all propositions are true. This is why it is important that axioms of set theory are consistent, as a single inconsistency would destroy mathematics.