One of the more familiar examples of fractal curves is the Koch snowflake. It is a closed curve of infinite length and Hausdorff dimension log(4)/log(3), homeomorphic to the unit circle. It bounds a region which, when combined in two different sizes, can tile the plane (as noted by Benoit Mandelbrot): 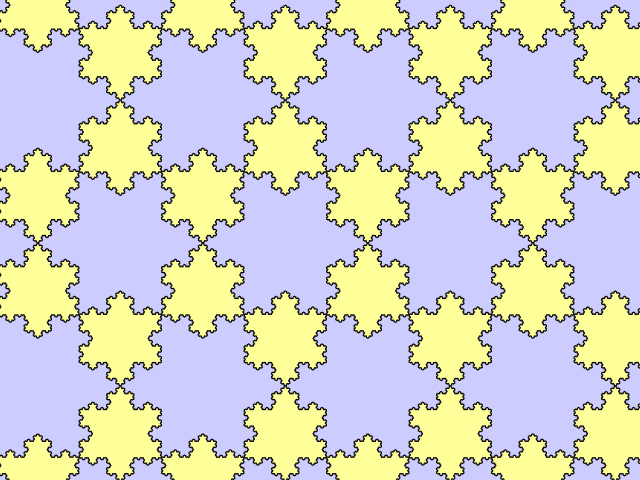 The Koch snowflake can be constructed from three copies of the von Koch curve. This is a self-similar fractal curve, composed of four copies of itself, each scaled by

. Varying the value of σ between ¼ and ½ yields a family of fractal curves, with Hausdorff dimension ranging from 1 (a straight line) to 2 (a spacefilling curve):

In each of the curves, the same value of σ is used for all iterations. If, instead, we vary the value of σ, then the Hausdorff dimension is a function of the limiting value of σ (assuming the limit exists). In the following curve, σ successively takes on the values {1/4 + 1/5, 1/4 + 1/6, … , 1/4 + 1/n, …}, so the limiting value of σ is ¼, and the Hausdorff dimension is 1. Hence, this is not technically a fractal. However, an easy computation will verify that the length (product, over all iterations, of 4σ) is infinite.

In other words, we have a non-fractal curve that nevertheless exhibits many of the same properties as fractal curves (infinite length, approximate self-similarity, etc.). On the other hand, if the values of σ converge to ¼ sufficiently quickly, then we obtain a curve of finite length.