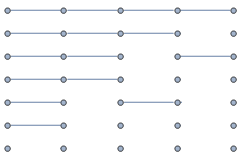 This visualisation, where partitions are graphs whose connected components are path graphs, leads to an immediately equivalent formulation as the number of distinct graphs on n vertices that do not contain the claw graph or the triangle graph as a minor.

Unlike (for example) the number of permutations, the partition numbers lack a simple closed form. Rademacher’s formula is massively complicated:

In practice, one would never use this closed form, since there are cleaner ways of computing the partition numbers. For instance, it is not too difficult to find a recursive formula for the number p(n,k) of partitions of n into at most k parts, namely:

Equally straightforward to determine is the generating function for the partition numbers. It is a product of the geometric series

over all k, which simplifies to the reciprocal of the following product:

It is a remarkable theorem, due to Euler, that the exponents are given by generalised pentagonal numbers. In other words, this product is expressible as a simple infinite sum: 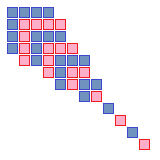 We then read off the distinct partitions as V-shaped lines, like so: 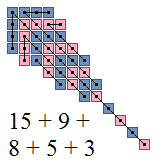 The first congruence can be explained by defining the rank of a partition as the difference between the largest part and the number of parts, and grouping the partitions into 5 equally large sets according to the residue class of the rank (modulo 5). This also works for the second congruence, by considering ranks modulo 7. Unfortunately, residue classes of ranks modulo 11 fails spectacularly for the third congruence.

Freeman Dyson conjectured in 1944 the existence of a more sophisticated combinatorial function, the crank, such that grouping partitions according to the residue class of the crank will give equally sized subsets. It took over forty years before such a function was discovered and proved to have the desired properties. Indeed, the crank of a function also proves the other two congruences.

Congruences exist for all other primes, except for 2 and 3. Hence, we know that there are infinitely many n such that p(n) is divisible by q, for any prime q other than 2 or 3. In fact, the case q = 2 can easily be dealt with, since its falsity would imply that for all sufficiently large n, p(n) is odd. We then choose a really large N (much greater than the last n such that p(n) is even), such that the pentagonal number recurrence avoids all of the even values of p(n), and such that there are an even number of terms in the recurrence. We can do this, since the gaps between pentagonal numbers become arbitrarily large. This means that p(N) is even, leading to a blatant contradiction.

This leaves just the case of q = 3, which is an unsolved problem. It is, of course, conjectured that there are infinitely many partition numbers divisible by 3, since the negation of this statement would be incredibly bizarre. Nevertheless, it remains to be proved.