The 50-pence and 20-pence coins are regular curvilinear heptagons, where each edge is a circular arc centred on the opposite vertex. 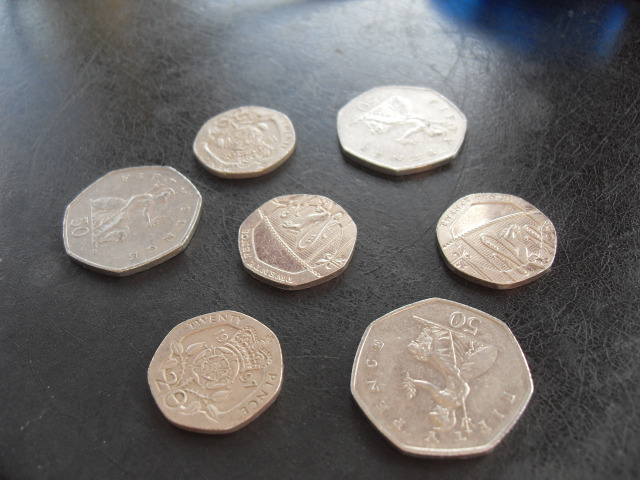 One may ask why the coins have such an unusual shape. One possible answer is that it is impossible for a counterfeiter to forge with just a compass, straightedge and sheet of cupronickel. However, since compass-and-straightedge constructions are seldom used in practice, this is clearly not the reason.

This curvilinear heptagon has another property, which is easiest to demonstrate with its triangular analogue, the Reuleaux triangle. It is a curve of constant width, which means that all of its axonometric shadows are line segments of equal width. Equivalently, when rolled on a flat surface, the height of the coin remains constant.

The reason for employing a curve of constant width is that it can be more easily recognised by mechanical coin-detecting machines. The Reuleaux polygons are not the only curves of constant width, however, since we can easily design irregular curvilinear polygons with this property. Again, these are all piecewise circular. 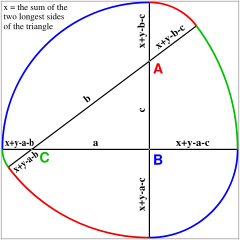 The next question is whether there exist curves of constant width which are not piecewise circular. Intuitively, the answer is yes, since it seems plausible that a limiting process could be applied where the lengths of the circular arcs tend to zero. A more rigorous formulation is given by the following system of differential equations, where

(as functions of t) are the endpoints of the line:

It transpires that there are algebraic curves other than the circle, which have constant width. One example is a degree-8 curve discovered by Stanley Rabinowitz.

Meissner tetrahedra can be obtained commercially from Maths Gear.

0 Responses to Curves of constant width