Finding volumes of cones and spheres

So, suppose you want to calculate the volume of a sphere, and hitherto only know that the volume of a cylinder is πr²h. We cannot use a clever argument involving cutting the cylinder into finitely many compact pieces with piecewise-smooth boundaries and reassembling them into a sphere, as you can convince yourself that the quantity:

must remain invariant under the operations of dissecting and reassembling. And since a cylinder has I = 0 whereas a sphere has I > 0, they are not scissors-congruent.

Then, using a dissection argument, we can show that a pyramid has one third of the volume of its bounding cuboid. Putting these three facts together leads to a simple relationship between the volumes of a cone and cylinder of the same base area and height:

The next part is a significantly more sophisticated application of Cavalieri. Suppose we have a sphere of radius R centred on the origin, and consider the intersection with the horizontal plane z = a. By Pythagoras’ theorem, this has area r² − a², which is coincidentally also the area of an annulus bounded between concentric circles of radii r and a. Consequently, we can apply Cavalieri’s principle to show that a sphere has the same volume as the solid obtained by removing a double-cone from a cylinder:

When Archimedes calculated upper and lower bounds for the value of π, he did so by bounding a circle between a circumscribed and inscribed 96-gon. By increasing the number of sides of the polygons, we can obtain tighter bounds. 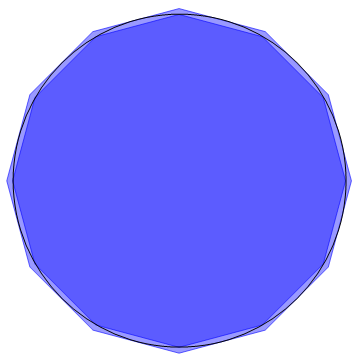 If the supremum of the lower bounds agrees with the infimum of the upper bounds (which it does for these regular polygonal approximations), then we have the exact area of the circle. Riemann integration uses precisely this method of exhaustion to find the area under general curves.

Unfortunately, not all functions are Riemann-integrable. The standard counter-example is the function defined on [0, 1] by f(x) = 1 if x is rational, and f(x) = 0 otherwise. The infimum of the upper bounds is 1, whereas the supremum of the lower bounds is 0, so we cannot obtain a precise value of the integral.

We can, however, use Cavalieri’s principle to produce a function g with the same area as f, but such that g is Riemann-integrable. In particular, for a general measurable function f, take g to be as follows:

Then f and g are Cavalieri-equivalent on a co-countable (untable?) set of values of y, so f and g must have the same area. But g is a monotonically decreasing function, so is therefore integrable. This gives the Lebesgue integral of f. In the case of the indicator function of the rationals, the Lebesgue integral is 0.