So, there hasn’t been a cp4space post for over a fortnight now. I’ll now attempt to excuse this massive lapse, and hopefully convince you that what I’ve been doing in the meantime is still somewhat worthwhile. Amongst other things, I met the world-famous model theorist Ehud Hrushovski completely by coincidence in a random pub in Edinburgh.

Obviously, I’ve been working full-time, and being human it is also necessary to sleep. The evenings are primarily occupied by social events of some nature, which only really leaves the weekends to conduct any projects. So, in reverse chronological order, here is what I’ve been investigating in the last two weekends:

This is a surprisingly exciting group.

Firstly, it is straightforward to verify from its presentation that the group is a hyperbolic Dyck group, i.e. the orientation-preserving symmetries of the kaleidoscopic tiling of the hyperbolic plane by triangles with interior angles (π/2, π/3, π/10). 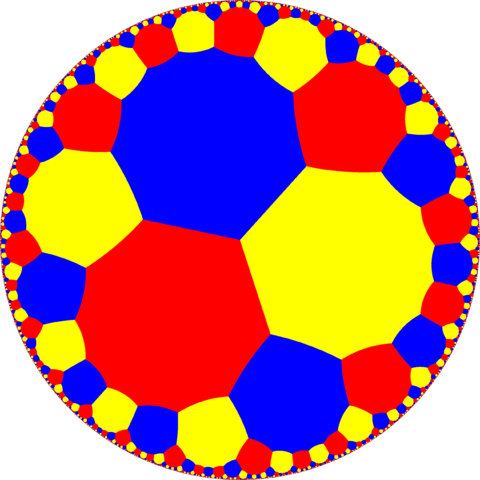 In other words, it is the group generated by the following Möbius transformations:

Now, this is a ring-theoretic definition, so we can apply a ring automorphism and replace exp(pi/5) with exp(3pi/5) in the above definition without changing the resulting abstract group. However, this is entirely different from a topological perspective, since we have a group of spherical symmetries — rotations — rather than hyperbolic symmetries.

So we can regard this as a dense subgroup of SO(3) generated by two rotations. It transpires that these are precisely the actions on the Bloch sphere by braiding three Fibonacci anyons — weird quasiparticles which can only exist in two dimensions. The element s corresponds to interchanging two strands by a twist whilst leaving the third in situ; the element t corresponds to cyclically permuting the three strands.

Interestingly, this behaviour could be used to build a fault-tolerant topological quantum computer; I’m currently writing an essay on the subject at the moment. See arXiv article 0902.3275 for a description of Fibonacci anyons, and 0707.1889 for a general review of topological quantum computation. It is important that the subgroup of SO(3) is dense, since this means any single-qubit unitary gate can be emulated to arbitrary accuracy by braiding anyons.

The resulting quantum computer, if realisable, would be so beautiful — all computations are performed simply by twisting particles around each other on the plane. Rather like a two-dimensional abacus, but so much more exciting!

Returning to the group, observe it has an index-6 normal subgroup. Specifically, we have a homomorphism into the symmetric group S3, by either considering the action of the braid group on the three strands, or of the hyperbolic group on the colours {red, blue, yellow} in the diagram above. I suspect that this subgroup is simple, since there doesn’t seem to be any obvious normal subgroup. A way to verify this would be to show that given a non-trivial group element, its conjugacy class generates the entire group.

For several months, Dave Greene, Chris Cain and Ivan Fomichev have been collaborating on building a variable-speed oblique spaceship in Conway’s Game of Life. After all of the components had been discovered, however, I had no qualms about spending a day writing an object-oriented Python script to assemble the components in an epic display of corollary-sniping!

The pattern file can be obtained from Golly’s online pattern archive. More information is on the ConwayLife wiki page, which seems to give me far more credit than I deserve (not that I’m complaining!). Chris Cain later optimised the design, reducing the period by an entire order of magnitude.

Anyway, as mentioned at the start of the article, it is vitally important that I sleep. Failure to do so could lead to fatigue-induced errors appearing in telecommunications software serving millions of people…