The Online Encyclopedia of Integer Sequences has recently celebrated its fiftieth anniversary, amassed over 250 000 sequences of varying importance, and heralded the 75th birthday of its creator Neil Sloane. It is somewhat surprising, therefore, that no-one appears to have investigated the intersection of two particularly natural integer sequences (catalogued as A000040 and A000179 in the OEIS).

In this article, I shall attempt to persuade you that investigating this new sequence of ménage primes is a good idea for several reasons. But until then, let us consider the problems that motivated this line of research.

Before the structure of the atom was properly understood, Lord Kelvin conjectured that atoms were vortex rings in a hypothetical ubiquitous fluid known as the luminiferous aether. The shape of the vortex ring writhes and undulates, but up to homotopy it remains constant throughout its lifetime. Begun was the idea that chemical elements correspond to homotopy classes of embeddings of the circle (more commonly known as knots), and classifying them would yield a mathematical explanation for the origin of the periodic table*.

* In reality, the periodic table stems from solving the Schrödinger equation for the potential effected by a point charge (the nucleus).

Realising that knots exhibit ‘unique prime factorisation’, Tait et al began enumerating the prime knots according to the minimal number of crossings when the knot is drawn as a diagram in the plane: 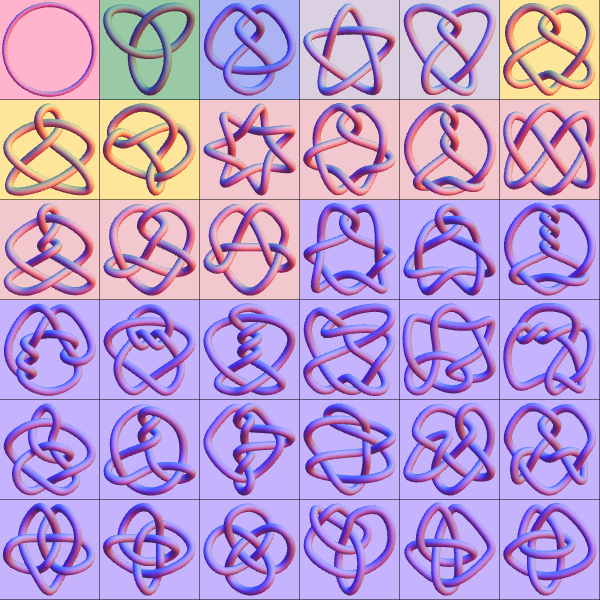 Shown above are all distinct prime knots with eight or fewer crossings. With the exception of the last three, these are all alternating knots, meaning that the string passes alternately over and under the crossings.

A knot diagram can be considered to be a 4-regular plane graph, where each vertex is decorated to specify which path goes over and which goes under. We can add further structure by 2-colouring the regions and assigning a direction to the knot. For example, the second knot in the third row yields this diagram: 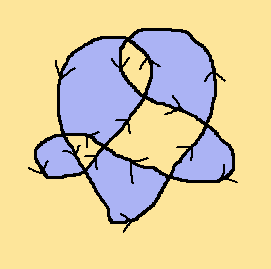 Each edge can be labelled from 1 to 2n, where n is the number of crossings, according to the order in which they are traversed. We define the parity of an edge to be whether the blue region is to the left or the right of the arrow on the edge. Observe that the parity alternates between successive edges in the traversal, so this corresponds exactly to the parity of the label.

At each vertex, an odd edge and an even edge converge. This yields a bijection between the odd and even edges of the diagram. Moreover, note that in a reduced diagram (with no trivial redundant crossings), consecutive edges never point to the same vertex.

Now draw a complete bipartite graph K(n, n), where each vertex corresponds to an edge in the diagram. We have a natural matching (the bijection between the odd and even edges of the graph described above) and a natural Hamiltonian cycle (the order of traversal). These share no edges. There are two dual ways to view this as a graph-theoretic problem:

This problem was later rediscovered by Edouard Lucas in an entirely different setting.

At High Table, n Fellows and n guests (one for each Fellow) are seated around the perimeter of a topological disc. To maximise social interaction, the following rules are observed:

In how many ways is this possible? This is known as the ménage problem, due to an outmoded heteronormative statement of the problem involving married couples instead of ordered pairs of the form (Fellow, guest). One such arrangement for n = 7 is illustrated below and obtained from the knot diagram:

The crimson lines biject each Fellow (odd number) with his or her guest (even number); these correspond to edges converging to the same vertex in the knot diagram.

We can eliminate much redundancy in our enumeration by exploiting the vast amount of symmetry in the situation:

Removing the symmetry is equivalent to imposing that the Fellows are initially seated in a particular arrangement. Hence, our question reduces to:

Given an initial arrangement of n Fellows occupying alternate seats, in how many ways can we seat their guests in the remaining n seats such that no Fellow is adjacent to his or her guest?

An explicit formula is given in the OEIS (sequence A000179).

Which ménage numbers are prime?

I decided to do an overnight Mathematica run for values of n up to circa 10000. In the process, it found a spectacular 30281-digit ménage prime, M(8645). To put this into perspective, this is larger than any prime known before the discovery of 2^132049 − 1 in 1983. This suggests the following questions:

The first of these is extremely difficult, and the second is at least as hard (although we provide some heuristics in the next section). A more achievable goal is the following:

Find another ménage prime beyond the five already discovered.

If my heuristics are correct, the expected number of ménage primes between M(10^4) and M(10^5) is around 0.25, which is both low enough for me to be willing to offer the following prize and high enough that I’m slightly worried someone may win it.

Specifically, the first person to discover a new ménage prime can choose either of the following prizes:

[Update: it’s been over three years without any more primes being discovered, and I’ve long since lost the wig, so unfortunately I have redacted the prize.]

Although the ménage numbers are not exactly equidistributed modulo p for all p (for example, only 2/9 of them are divisible by 3), they do seem to asymptotically be prime as often as one would expect from a randomly-chosen number of a similar size. That is to say, M(n) appears to be prime with probability 1/log(M(n)).

Now we need an asymptotic formula for the ménage numbers. Since M(n) counts the number of permutations such that both σ(i) and σ(i) + 1 are derangements, we expect there to be roughly n!/e² arrangements. It can be shown that this estimate is asymptotically correct (the ratio tends to 1 as n tends to infinity), which by Stirling’s formula is in turn asymptotically equal to:

The sum of the reciprocals of the logarithms of these numbers diverges, which (by Borel-Cantelli) suggests that there are infinitely many ménage primes. However, it diverges sufficiently slowly that we only expect around log(log(m)) such primes for n < m. This means that in the long run, the number of ménage primes below a given value N is expected to be around log(log(invgamma(N))), where invgamma is the inverse Gamma function.

With these heuristic estimates, the expected number of ménage primes M(n) with n between 10^4 and 10^5 is roughly 0.25. It is entirely plausible that people may attempt to search further than 10^5; increasing this upper bound to 1.5 × 10^7 (corresponding to primes of over 100 million digits, therefore eligible for the 150 000 dollar prize offered by the Electronic Frontier Foundation) gives an expected value closer to 0.64.