Collaborative mathematics tends to be extremely fruitful. This is epitomised by the recent ‘polymath’ projects, culminating in a nice proof of density Hales-Jewett along with the frighteningly impressive results on bounded gaps between primes. On a much smaller scale, several of us were contemplating a bunch of interesting and completely unrelated problems we devised in the downstairs kitchen of a converted house in Burrell’s Field, Trinity College, Cambridge.

We’ve made non-trivial progress on many of these, and even succeeded in solving one! It was a natural question, which grew out of a much easier problem on an IMO shortlist:

Suppose you begin with a finite graph, and are allowed to apply operations of the following form:

Show that, after finitely many operations, one can reach a graph containing no edges.

This is not terribly difficult. It did, however, lead us to consider several related questions (which, at the time of proposal, were all completely new and unsolved). Observe that neither of the allowed operations can decrease the number of connected components of the graph, so if the original graph G has n connected components, then it is impossible to end up with fewer than n vertices. This prompts the following question:

Is this bound tight? Specifically, given a graph G with n connected components, can we necessarily reduce it to the empty graph on n vertices?

It is not too difficult to show that this is equivalent to the question where n = 1. In particular, every time we perform a duplication operation, we then immediately reduce any two-vertex components to single vertices by deletion. Then we can just concentrate on each component sequentially in isolation, without undoing any of our ‘previous work’. (More formally, we can induct on the value of n.)

Hence the problem reduces to:

Can every connected graph be reduced to a single vertex?

In the next few sections, we shall present a proof in the order we devised it.

It was quite informative to consider some special cases. Any tree can quickly be destroyed by repeatedly removing leaves until we are left with a single vertex. We then decided to consider the square, since it’s the simplest graph which is not a tree (chromatic number is considered to be more important than size, since it cannot increase under either of the operations). After much experimentation, Matei Mandache found the following sequence of operations (which is provably optimal):

Using this as a lemma, we were then able to reduce any cycle, and more generally any connected graph with

. This was something of a casebash, however, and clear that it would not generalise to yield a full proof. Surprisingly, this ad hoc case of reducing a square to a single vertex does turn out to be essential to our proof!

What about other graphs?

After having reduced the cube, it seemed natural to try the other Platonic solids. The tetrahedron is quite trivial (we can delete a vertex to yield a triangle, duplicate it to obtain a triangular prism, and remove two non-adjacent vertices to give a tree). The dodecahedron is slightly more convoluted, and this particular desynthesis embodies the method applicable to reducing any cycle: 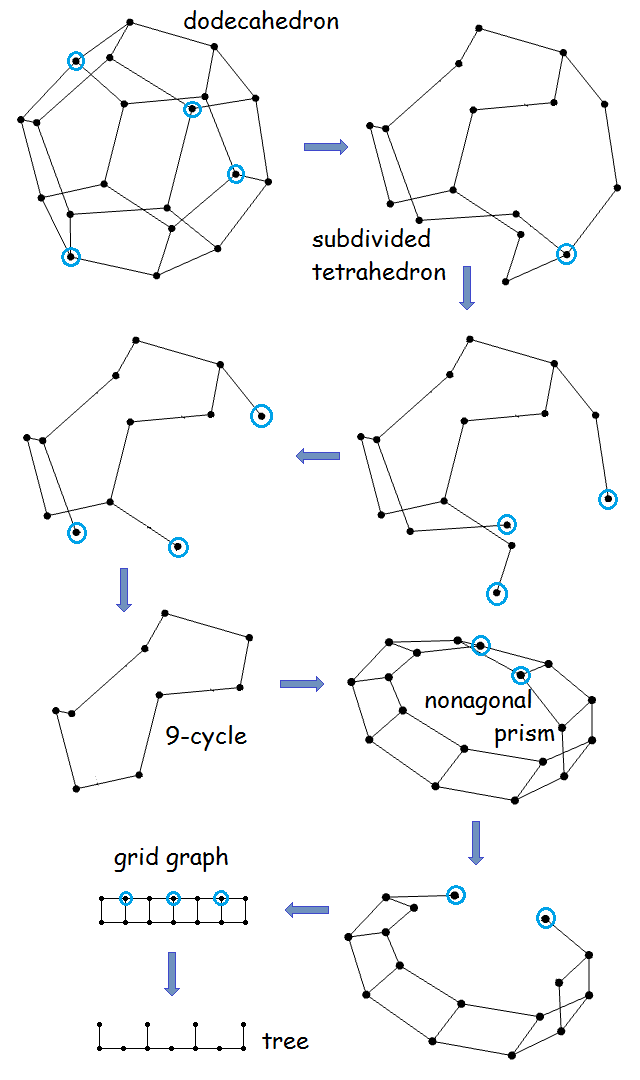 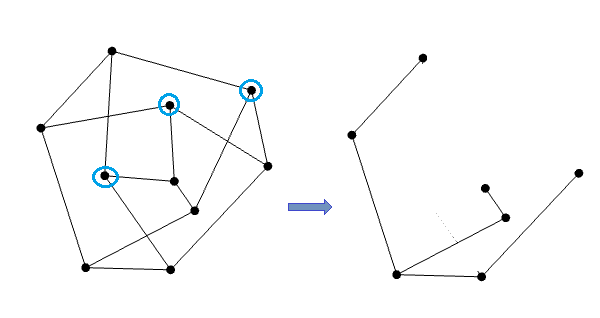 We realised that it would be very useful if we developed a method to reduce an arbitrary hypercube, since induced hypercubes appear as the result of performing repeated duplication operations. The first step in reducing a degree-(2k) hypercube must be to duplicate it to form a degree-(2k + 1) hypercube, since the former has no vertices of odd degree. Consequently, the first thing to consider was the degree-5 hypercube (with 32 vertices). Unfortunately, these things get very messy very quickly: 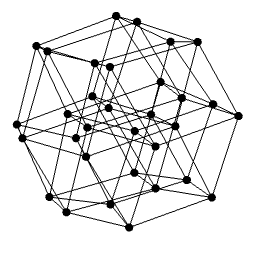 A more helpful way to represent this is as a ‘meta-cube’, each vertex of which is a ‘meta-vertex’ corresponding to a square of four ordinary vertices. Then we can delete an entire meta-vertex by deleting two non-adjacent vertices, followed by the other two vertices (the so-called Illingworth manoeuvre). Indeed, in any meta-graph, we can delete any meta-vertex of odd degree. And trivially we can duplicate the entire meta-graph. This has the following consequence:

And since we already know how to reduce a square to a single vertex, we obtain the following lemma:

If G can be reduced to a single vertex, then so can the product of G with a square C4.

Naturally, this can be generalised by iterated application of itself:

If G can be reduced to a single vertex, then so can the product of G with an arbitrary hypercube.

We shall think of this from an equivalent, but much more liberating, perspective:

If we grant ourselves the operation of ‘unduplication’, then the set of graphs we can reduce to a single vertex does not increase.

Henceforth, we shall thus allow unduplication. 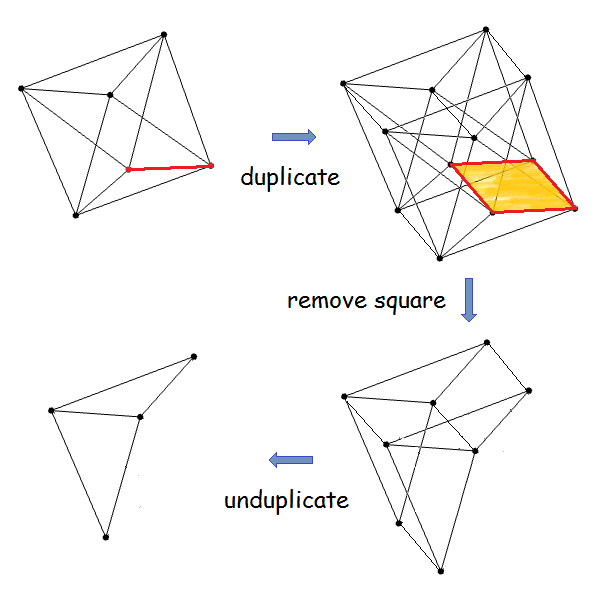 So we now have a fourth operation, namely deleting two adjacent vertices of even degree. I now claim that two of our four operations can together reduce any connected graph to a single vertex:

Suppose instead that there is a counter-example, and consider a minimal counter-example (i.e. one with the fewest vertices). This must have the following properties:

Consider a graph where these properties hold. We’ll distinguish two cases, namely those where every vertex is even, and those where there exists at least one odd vertex. In each case, we shall obtain a contradiction.

Case I: At least one odd vertex exists

For each odd vertex, we can define its ‘depth’ to be the minimum order of the connected components produced when that vertex is deleted. Now take a vertex v of minimum depth; the minimal connected component produced by deleting v must necessarily consist only of even vertices (since otherwise any of those odd vertices must have lower depth). So our counter-example must resemble this:

We’ll concentrate entirely in the region on the right, where everything has even degree. Matei Mandache had the idea of separating this into strata according to their distance from v.

This contradicts our assumption of minimality.

Case II: All vertices have even degree

This is actually amenable to the same proof technique as before. We let v be an arbitrary vertex, and again stratify the graph so that it resembles this: 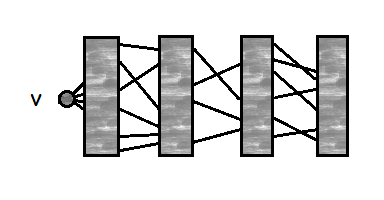 Now we can use exactly the same proof as in the previous case.

What other questions can we ask?

We can ask the more general question as to whether, given graphs G and H, we can get from G to H using those two operations. Note that in general, we no longer have the freedom of unduplication or the removal of two adjacent vertices of even degree.

Clearly, we can get from G to H only if H is an induced subgraph of the product of G with a hypercube. Is the converse also true? Again, this is a strictly harder question than the one that we solved in the downstairs kitchen of ‘V’ House, but it should be quite fun to solve.

4 Responses to Oligomath 1: Deletion and duplication