Tim Hutton recently presented me with a marvellous 3D-printed-graphite set of triakis truncated tetrahedra. These have a natural interpretation as the Voronoi cells of a diamond: the shapes that would form if you gradually enlarged the atoms until they tessellate the ambient space. 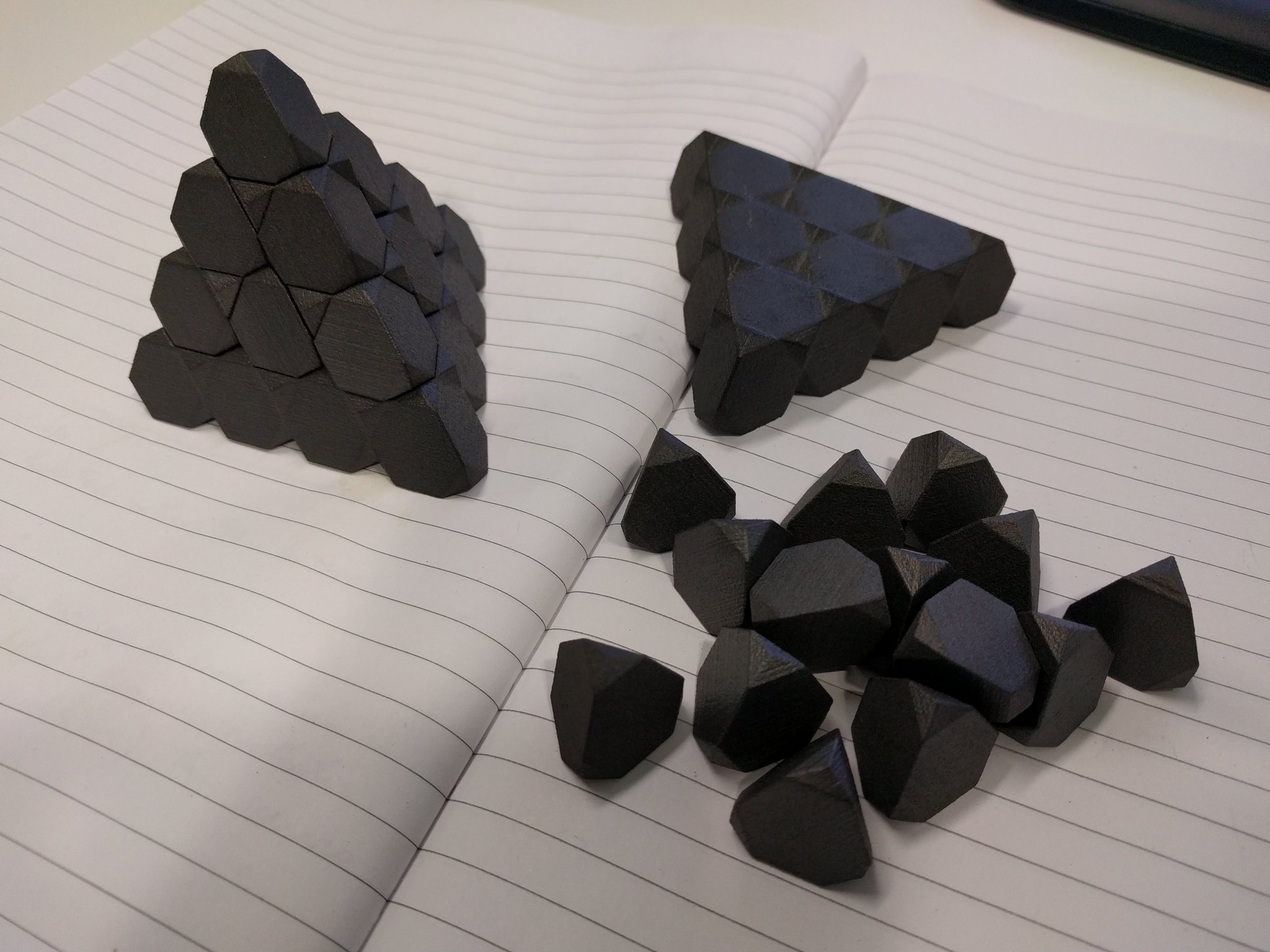 He also produced a video describing the relationship between the Voronoi cells of the diamond and related lattices.

Mathematically, the set of centres of atoms in a diamond form a structure called

. It has a natural n-dimensional generalisation, which can be viewed as follows:

This construction makes it adamantly* clear that the ‘hyperdiamond’ has the same density as the integer lattice, and therefore the Voronoi cells have unit volume. A lattice with this property (such as the hyperdiamonds of even dimension) is described as unimodular.

*bizarrely, this word has the same etymology as ‘diamond’, namely the Greek word adamas meaning ‘indestructible’. I often enjoy claiming that my own given name is also derived from this same etymology.

In the special case where n = 8, this is the remarkable E8 lattice, which Maryna Viazovska proved is the densest way to pack spheres in eight-dimensional space. One could imagine that if beings existed in eight-dimensional space, they would have very heavy diamond engagement rings! It is an even unimodular lattice, meaning that the inner product of any two vectors is an even integer, and is the unique such lattice in eight dimensions. They can only exist in dimensions divisible by 8, and are enumerated in A054909.

If n = 16, the hyperdiamond gives one of two even unimodular 16-dimensional lattices, the other being the Cartesian product of E8 with itself. These two lattices have the same theta series (sequence giving the number of points at each distance from the origin), but are nonetheless distinct. If you take the quotients of 16-dimensional space by each of these two lattices, you get two very similar (but non-isometric) tori which Milnor gave as a solution to the question of whether two differently-shaped drums could produce the same sound when reverberated.

John Baez elaborates on the sequence of ‘hyperdiamonds’, together with mentioning an alternative three-dimensional structure called the triamond, here.

There are 24 even unimodular lattices in 24 dimensions, the so-called Niemeier lattices, of which the most famous and stunning is the Leech lattice. This was also proved by Viazovska and collaborators to be the densest sphere packing in its dimension. Unlike the hyperdiamonds, however, the Leech lattice is remarkably complicated to construct.

The 23 other Niemeier lattices correspond exactly to the equivalence classes of deep holes in the Leech lattice, points at a maximum distance from any of the lattice points.