This last week has been very exciting. On Thursday, I gave a talk in absentia at the 13th Gathering for Gardner on the topic of artificial life (thanks go to Dave Greene and Tom Rokicki for playing the slides and audio recording). Meanwhile, this happened:

Chromatic number of the plane is at least 5

Aubrey de Grey (!!!) has found a unit-distance graph with 1567 vertices and a chromatic number of 5. This implies that the chromatic number of the plane is between 5 and 7, the latter bound obtainable from 7-colouring the cells of an appropriately-sized hexagonal lattice. Before, the best lower bound was 4 (from the Moser spindle). 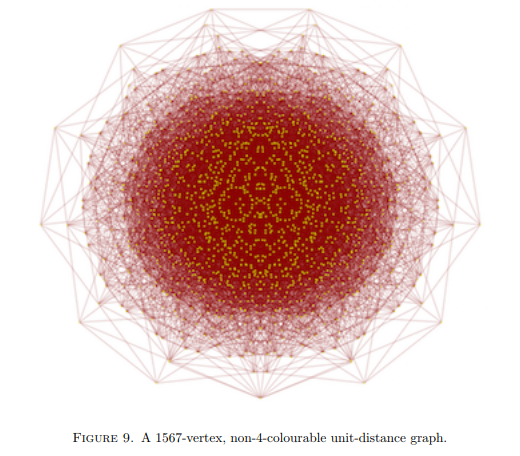 There is now a polymath project to reduce the number of vertices from 1567. Marijn Heule, whom I mentioned last time for providing me with the incremental SAT solver used to find Sir Robin, has already reduced it down to 874 vertices and 4461 edges.

The results of the European Girls’ Mathematical Olympiad have been published. The UK came third worldwide, just behind Russia and the USA. Moreover, Emily Beatty was one of five contestants to gain all of the available marks, and apparently the first UK contestant to do so in any international mathematical competition since 1994.

It appears that EGMO has been following the example of the Eurovision Song Contest in determining which countries are European, rather than actually verifying this by looking at a map. Interesting additions include the USA, Canada, Saudi Arabia, Israel, Australia, Mongolia, Mexico and Brazil. The list of participating countries states that there are 52 teams, of which 36 are officially European (and a smaller number still are in the EU).

Restricting to the set of countries in the European Union, the UK won outright (three points ahead of Poland), which was the last opportunity to do so before the end of the Article 50 negotiations. Hungary and Romania put in a very strong performance, as expected.