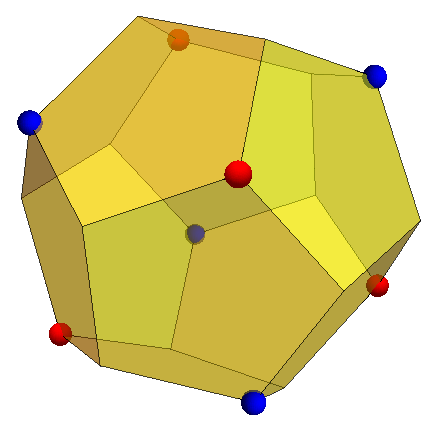 Note that the centroid of a regular polytope is also the circumcentre — the unique point equidistant from all of the polytope’s vertices — which implies that if one polytope subsumes another, the two vertex-sets must share the same centre. Consequently, we assume without loss of generality that regular polytopes are always centred on the origin.

The only regular polytopes in two dimensions are the regular polygons. Using the above reasoning, it is straightforward to see that an m-gon subsumes an n-gon if and only if n is a divisor of m.

In three dimensions, there are exactly five regular polytopes, the Platonic solids. We have already seen that the tetrahedron, cube, and dodecahedron form a chain of subsumptions. It can be shown that these are the only subsumptions between Platonic solids. In particular, if we normalise the solid P to be centred on the origin and have unit radius, we can calculate the set S(P) of pairwise inner products between the vertices of the polyhedron. If P subsumes Q, then S(Q) must necessarily be a subset of S(P).

In four dimensions, there are six ‘Platonic solids’. Five of these form a subsumption chain:

There’s a really elegant way to see these inclusions in terms of quaternions. The group Q8 of eight quaternions {±1, ±i, ±j, ±k} form the vertices of an orthoplex.

This is an index-3 subgroup of the binary tetrahedral group, which contains these eight quaternions together with the 16 unit quaternions of the form:

These 16 quaternions manifestly form the vertices of a hypercube. Moreover, because we can partition the binary tetrahedral group into cosets with respect to the subgroup Q8, it follows that this hypercube is the union of two disjoint orthoplexes. Taken together, these 24 quaternions form the vertices of a 24-cell, a four-dimensional regular polytope which has no analogue in three dimensions.

Animation by Greg Egan of a 24-cell undergoing a double rotation.

The 600-cell has 120 vertices which can be identified with the unit icosians, a group of 120 unit quaternions which contains the binary tetrahedral group as an index-5 subgroup. It follows, therefore, that the 600-cell subsumes the 24-cell.

If you take the ring generated by the unit icosians, the 600 norm-2 elements form a scaled copy of the 120-cell, a four-dimensional analogue of a dodecahedron. We can identify norm-2 elements if one can be obtained from the other by right-multiplication by a unit icosian; this partitions these 600 vertices into five equivalence classes, each geometrically similar to the 120 vertices of a 600-cell.

The remaining four-dimensional regular polytope, the simplex, is subsumed only by the (600-vertex) 120-cell. [EDIT: This was amended from the previous (incorrect) statement that the simplex is not subsumed by any of the other polytopes.]

In higher dimensions, there are only three regular polytopes: the simplex, the orthoplex, and the hypercube.

The orthoplex consists of n orthogonal pairs of opposite vertices. For this to be subsumed by a hypercube is equivalent to the existence of a matrix M consisting entirely of entries ±1 such that H := M / √d is a real orthogonal matrix. Such Hadamard matrices exist whenever n is a power of 2. If n ≥ 3, it is easy to show that n must be a multiple of 4, and the converse is conjectured to be true:

Does a Hadamard matrix exist in dimension n whenever n is divisible by 4?

When does the hypercube subsume a simplex? This is equivalent to having n+1 vectors with entries ±1 such that, for every pair of vectors, they disagree in sign in (n+1)/2 coordinates and agree in sign in the other (n−1)/2 coordinates. If we appended an (n+1)th coordinate which is identically 1 to every vector, they would all be orthogonal and therefore form a Hadamard matrix. The converse is also true: removing a column of a Hadamard matrix results in a set of rows which form the vertices of a regular simplex.

2 Responses to Subsumptions of regular polytopes