A curious construction of the Mathieu group M11

Previously, we discussed which regular polytopes have vertex-sets that occur as proper subsets of the vertex-set of another regular polytope in the same dimension. In particular, when there is a Hadamard matrix of order 4k, then then the (4k−1)-dimensional simplex can be inscribed in the (4k−1)-dimensional hypercube. Moreover, the converse also holds.

Upon noticing that there exists a unique order-12 Hadamard matrix up to isomorphism, Daniel Sebald asked what the symmetry group is of the 11-dimensional simplex inscribed in the 11-dimensional hypercube. It can be shown that this is exactly the smallest sporadic group, M11, with exactly

Another object with a related automorphism group is the perfect ternary Golay code. This is a linear subspace of

consisting of 729 codewords with the property that any pair of distinct codewords differ in at least 5 coordinates. (Consequently, if you’re given a codeword with ‘errors’ in at most 2 coordinates, you can uniquely recover the original codeword.)

This turns out to be no coincidence! If we label the elements of the field of three elements as {−1, 0, 1}, then exactly 24 of the 729 codewords have no ‘0’-coordinates. These 24 codewords can be regarded as a subset of the vertices of the hypercube {−1, 1}^11, and geometrically they form a pair of mutually dual 11-dimensional simplices inscribed in the hypercube! Eleven dimensions are hard to visualise, so here is a three-dimensional analogue: 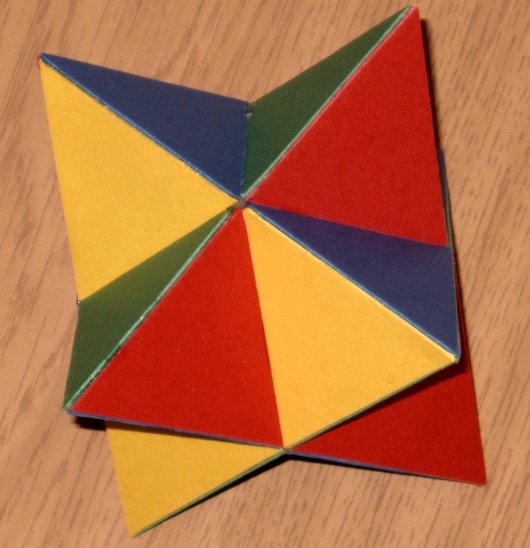 The automorphism group of each individual simplex is the symmetric group S11, but the automorphism group that preserves the bounding hypercube is the Mathieu group M11. If you include both simplices, the groups are doubled (C2 × S11 and C2 × M11, respectively), where the C2 factor is the centre consisting of the identity matrix and its negation.

1 Response to A curious construction of the Mathieu group M11