Recall that the logarithm function (defined on the punctured complex plane) is multi-valued, with the different solutions to exp(x) = y differing by integer multiples of 2πi. 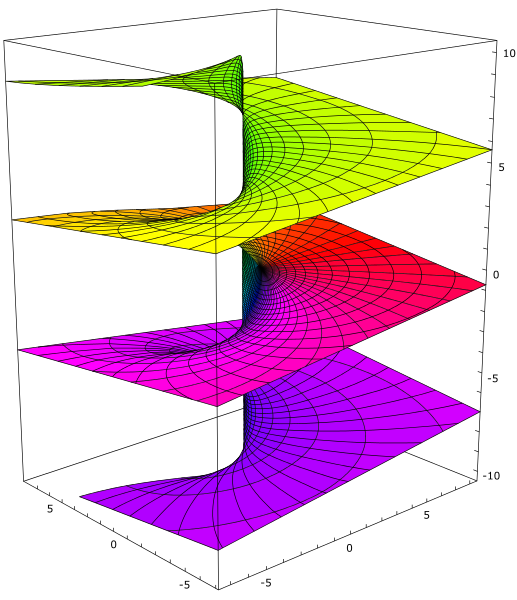 Visualisation of the imaginary part of the multi-valued complex logarithm function, created by Leonid 2.

Timothy Chow described an interesting subfield of the complex numbers, known as either closed-form numbers or (less ambiguously) EL-numbers. We’ll present a slightly different but equivalent definition here, where we embrace the complex logarithm function in its full multivalued glory instead of choosing a principal value of the logarithm function.

In particular, the EL-numbers can be defined as follows:

*this slightly unconventional operation f, which is equivalent to having both addition and subtraction rules, was chosen because it’s completely symmetric: the validity of c = f(a, b) is invariant under permutation of a, b, and c. The relevance of this will become apparent in a future post.

**we show that this implies that all solutions are EL-numbers, so this definition is well-defined.

The first two rules provide us with unary negation and addition, so we know that the EL-numbers form an additive group:

Togther with the other two rules, we can show that the EL-numbers form a field. In particular, if x and y are nonzero, then exp(log(x) + log(y)) = xy and exp(−log(x)) = 1/x irrespective of which choices of logarithms were taken. Finally, we need the multiplicative identity 1 to exist, but that can be obtained straightforwardly as exp(0).

To show that we can obtain all logarithms (not just one), we apply the following procedure:

Note that this was somewhat ‘interactive’: we needed to know what solutions x and p were obtained in order to choose the correct rational number q to use. The ‘closed-form expression’ for w depends on the branches of the logarithms taken, and each of these expressions are ‘nondeterministic’ in the sense that if someone changed which branches were taken, they would no longer define w.

Well, yes: the imaginary unit i can be obtained as exp(log(−1) / 2). We’ll call this a nondeterministic EL-number, because any closed-form expression for i is also a closed-form expression for −i. By the same argument (namely the fact that complex conjugation is an exponential field automorphism of the complex numbers), every nonreal EL-number is necessarily nondeterministic.

π is also an EL-number, because both πi and i have already been shown to be EL-numbers, and we know that they form a field. Is it a deterministic EL-number? Certainly it hasn’t been proved that this is not the case, because it hasn’t even been shown that e + π is irrational. But on the other hand, it seems very difficult to find a construction of π that doesn’t also end up constructing an infinite number of other multiples of π.

My suspicion is that π is not a deterministic EL-number — can this be proved, conditional on a plausible assumption such as Schanuel’s conjecture?