There’s a very elegant cryptographic construction discovered by Barreto and Naehrig in a 2005 paper. It is beautiful from a pure mathematical perspective, but also has an impressive application: it was* part of the ingenious mechanism by which Zcash supports publicly-verifiable private transactions.

‘Publicly-verifiable private transactions’ sound paradoxical: they’re transactions where the inputs and outputs are cryptographically obfuscated (so no-one can see how much money is changing hands), but where it’s still possible for a member of the public to verify that all inputs and outputs are nonnegative and that the sum of the inputs equals the sum of the outputs (so there’s no ‘cheating’ happening).

If you’re not amazed by this, then I haven’t explained it properly: all account balances are encrypted, and the amounts of money changing hands in a transaction remains completely encrypted, but the transactions include a certificate which proves that the inputs and outputs (which are encrypted) satisfy nonnegativity and conservation of money. No information about the inputs and outputs is revealed, other than the fact that the transaction doesn’t ‘cheat’. This is an example of a ‘zero-knowledge proof’, and I still find it completely and utterly surprising that these things are even possible.

The rest of this article will attempt to explain one of the key mathematical ingredients (a construction of cryptographic pairings) and then briefly outline how it fits into these zero-knowledge proofs used in Zcash.

*Zcash changed their curve in 2017 from a Barreto-Naehrig curve to a BLS curve. BLS curves end up being marginally more efficient (higher level of security for a given size of elliptic curve), which is why the programmers made the change. The principle is still the same, namely constructing an elliptic curve which supports ‘pairings’, but there are various quantitative differences between Barreto-Naehrig and BLS curves. The reason for concentrating on Barreto-Naehrig curves is that they’re somewhat simpler and more aesthetically pleasing.

What are elliptic curves?

[If you know about the elliptic curve group law and the Cayley-Bacharach theorem from algebraic geometry, feel free to skip this section.]

The points on an elliptic curve (cubic curve with no singularities) can be made into an Abelian group. In particular, we define an operation by the following:

Traditionally, people often study elliptic curves in Weierstrass normal form, where the equation of the curve is

. The identity point 0 is then typically chosen to be the point ‘at infinity’ where the curve intersects the line at infinity on the projective plane.

To show that this works as a definition, we firstly need to see that it’s well defined. In particular, given two points P and Q, how do we know that the third intersection R with the line ℓ through P and Q is uniquely determined?

This gives the following procedure for ‘adding’ two points:

Then S is the sum of P and Q. This operation is commutative (interchanging P and Q does not affect the result), but how do we know that it’s associative? In particular, given the following diagram from a talk I gave in Winchester a couple of years ago, how do we know that the elliptic curve (blue), orange line, and green line all mutually intersect at the bottom-left? 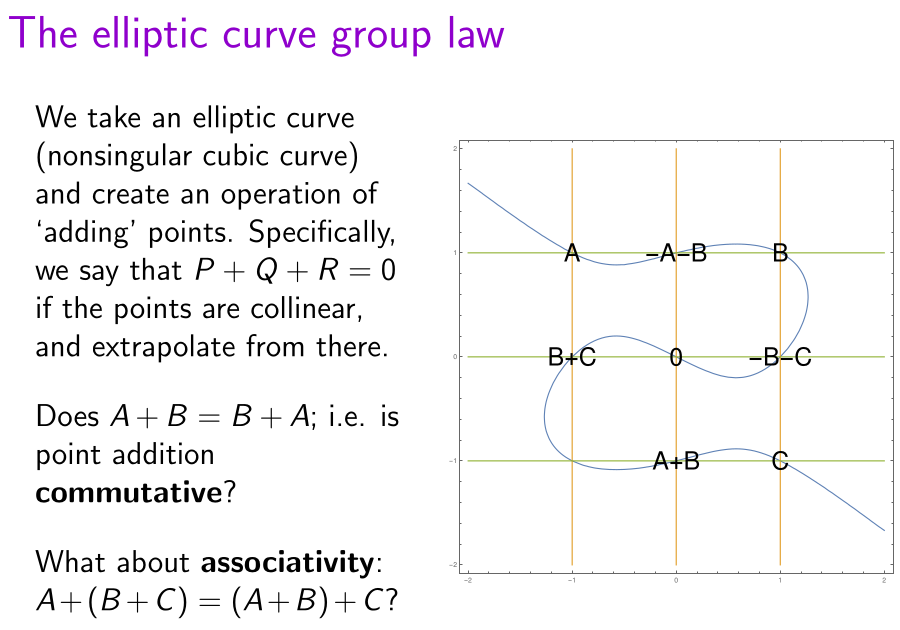 It’s painful to verify this algebraically, but it follows immediately from the Cayley-Bacharach theorem. We’ve previously discussed this theorem, along with several miscellaneous applications to Euclidean geometry.

There are two reasons why elliptic curve cryptography requires the use of a finite field instead of the real or complex numbers. One reason is practicality: there are uncountably many reals, most of which cannot be described, and therefore they cannot feasibly be represented on a computer.

The other reason is security: the Weierstrass elliptic function allows you to construct an isomorphism between the elliptic curve and a torus (specifically, the complex plane quotiented out by an appropriate lattice), and the ‘discrete logarithm problem’** on a torus is trivial; you can solve it efficiently using continued fractions.

On the other hand, for elliptic curves over a finite field, there is no known way to efficiently solve the elliptic curve discrete logarithm problem on a classical computer; this is how HTTPS and Bitcoin digital signatures remain secure. On a quantum computer you can use Shor’s algorithm, but you’d need a fault-tolerant 2330-qubit quantum computer with 128 billion Toffoli gates to break the 256-bit curve ‘secp256k1’ used for Bitcoin digital signatures, and that seems to be beyond the current technological capabilities of large commercial*** organisations.

***I doubt governments have this technology either. After all, they use Excel spreadsheets as a database for tracking the spread of a pandemic.

G is just a global ‘base point’ on the elliptic curve Γ which (together with the curve itself) is a public parameter of the cryptosystem. The order n of G (smallest integer such that nG = 0) must be prime. Then we have an isomorphism from [the additive group of]

to the elliptic curve:

which is cryptographically irreversible.

The existence of this one-way function enables various important cryptographic primitives to be built on top of elliptic curves, such as the aforementioned elliptic curve digital signature algorithm (ECDSA) used by HTTPS and Bitcoin. In ECDSA, Alice’s private key is some integer

, and her public key is the corresponding point mG on the elliptic curve Γ.

by interpreting it as a binary number and reducing modulo n.

, and reveals the following:

Neither r nor s is allowed to be zero; if this happened (incredibly unlikely!), Alice should generate a new value k and try again. These data (r, s) together form the digital signature for the message M. Bob can verify that Alice created the signature by computing the cryptographic hash z and checking that the curve point (r/s)(mG) + (z/s)G has abscissa r. This only requires Bob to know the public-key mG, not the private-key m.

ECDSA key-pairs can be reused to sign many messages, but you must generate a different random number k each time you sign a message. Otherwise, it’s possible for someone to determine your private-key. Indeed, several bitcoins were stolen by attackers as a result of a poor random number generator on early versions of the Android operating system.

A cryptographic pairing on an elliptic curve Γ is a bilinear map from Γ × Γ’ to [the multiplicative group of] some field F, where Γ’ is another elliptic curve isomorphic to Γ and related by a ‘twist’ (explained here). That is to say that:

where P, Q are curve points on Γ, Γ’ (respectively) and a, b are integers. Note that the existence of a cryptographic pairing means that the elliptic curve discrete logarithm (hard) on Γ can be transported to the ordinary discrete logarithm (not quite as hard for a given size) on the field F. As such, the field F needs to be substantially larger than the curve Γ, lest it be the Achilles heel of the cryptosystem.

The field F is a finite field

, whose characteristic p matches that of the ambient field

For Bitcoin’s curve, the embedding degree is humongous (comparable to the number of points on Γ), which makes the pairing impossible to use. On the other hand, if k were very small (e.g. 1 or 2), the discrete logarithm in F would be much weaker than the discrete logarithm in Γ, so you’d need a massive elliptic curve to attain a desired level of security, and that would come at a computational cost.

Details of the Barreto-Naehrig construction

The size of a Barreto-Naehrig curve is parametrised by an integer x. The values p and n are quartic polynomials in the value x:

Observe that the difference between them is only 6 x^2, which is slightly lower than the square-root of p (or n), consistent with Hasse’s bound. The validity of the construction relies on the fact that n is a factor of the 12th cyclotomic polynomial evaluated at p − n = 6 x^2:

We need to choose a value of x such that these two numbers are prime; the first few such positive values of x are:

which apparently isn’t yet in the OEIS. (I’ll add it.)

Of course, those values of x are far too small for cryptography. If you want a 256-bit elliptic curve, then you’ll want to choose x to be slightly lower than 2^64. By the prime number theorem, if you choose a random x you have a probability of 1/log(x)² that the numbers p and n will be prime.

After you’ve chosen a suitable x which passes both primality checks for p and n, you need to build the curve itself. Rather like Bitcoin’s elliptic curve secp256k1, the coefficient ‘a‘ in the equation

is zero. [Note: the parameter x is not the same as the coordinate x; they just happen to have the same name.]

To determine b, you just keep trying successive values until you find one that works, as described in their algorithm:

Once you have the curve, how do you compute the pairing? There’s an algorithm by Miller (1986) for efficiently computing Tate/Weil pairings on arbitrary elliptic curves, and a paper by Devegili, Scott, and Dahab (2007) describes an optimised implementation of Tate and Ate pairings specifically for Barreto-Naehrig curves.

Furthermore, for efficiency reasons in the pairing computation it is desirable to generate curves of prime order n such that n has a low Hamming weight. Constructing such curves for k = 12 or φ(k) > 4 is still a research problem.

The best choice of parameter I could find using the Barreto-Naehrig construction was x = 3(2^75 + 1), which results in n having 312 bits of which only 36 are nonzero.

Why are pairings useful?

They’re useful because they allow more computations on encrypted data.

Simply put, in the same way that an elliptic curve supports addition of numbers that have been encrypted as points, a pairing supports multiplication of encrypted numbers. It’s somewhat restricted, because the ‘product’ of two points belongs to F instead of Γ (i.e. it has a different type from those of the two multiplicands), so you can’t directly compute an encrypted product of three or more encrypted numbers. This is why pairings fall short of fully homomorphic encryption.

Despite this constraint, it’s still possible to take your desired computation (expressed as an arithmetic circuit) and compile it into a system of constraints that can be verified using pairings.

There’s an excellent explanation of zk-SNARKs here, which pedagogically illustrates this property of a pairing using the following diagram: 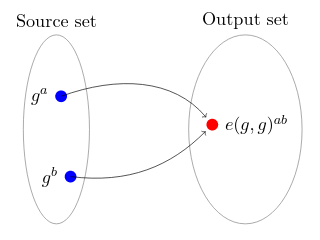 Illustration by Maksym Petkus from his article, Why and How zk-SNARK Works: Definitive Explanation

Petkus’s explanation abstracts away the particular choices of cryptographic primitives (the words ‘elliptic curve’ being mentioned only once in the whole article), but it’s useful additional context to know that the ‘Source set’ above is the elliptic curve Γ and the ‘Output set’ is the much larger embedding field F.