Yes, the title sounds very counterintuitive. After all, don’t digital signature schemes require the general public to know your public key so that they can verify your signatures?

The pseudonymous inventor of Bitcoin, Satoshi Nakamoto, must have realised this when he or she wrote the whitepaper. A Bitcoin address (to which you send coins) is a RIPEMD-160 hash of a SHA-256 hash of the elliptic curve public key. Importantly, this hash is not the same thing as the public key itself.

Why does this matter? It turns out that the hash offers a much stronger level of security than the elliptic curve: 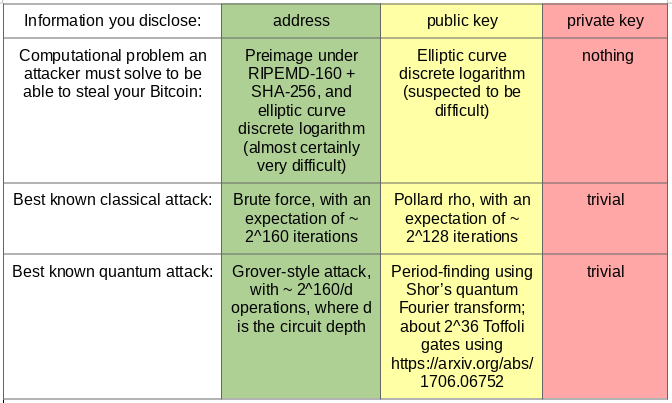 Note that the attacker will almost certainly end up with a different private key from the one you created, but it will ‘coincidentally’ be able to unlock the coins in the same address. This is because the 160-bit space of addresses is 2^96 times smaller than the 256-bit space of elliptic curve keys.

What if an attacker knows your elliptic curve public key? Then, using the Pollard rho algorithm, it ‘only’ takes on the order of 2^128 iterations to determine your private key. That’s still humongous; even with all of the computing power currently available on the planet, it would take millions of years to reverse-engineer your private key.

So why should you be concerned? There are two reasons:

If you’re unconvinced that this second reason is even remotely plausible, and strongly believe that Pollard rho is obviously the best possible algorithm for solving elliptic curve discrete logarithm, then you should ask yourself why serious cryptographers such as Joe Silverman are bothering to develop alternative methods.

(Before you dismiss this as an argumentum ad verecundiam, note that this is not purporting to be an argument that elliptic curve discrete logarithm is definitely insecure. Rather, it’s an argument that there’s no known proof that it is secure, because if such a proof did exist, then there would have been no point in Silverman proposing an approach that is guaranteed to fail.)

So, 2^128 iterations should be regarded as ‘an upper bound, which is tight assuming that there will be no academic, industrial, or governmental progress on finding faster algorithms’. And if a large-scale fault-tolerant quantum computer is developed, be very afraid…

On the other hand, cryptographic hash functions such as SHA-256 and RIPEMD-160 (both of which are composed to derive the Bitcoin address from the public key) are designed to thoroughly mush the input in as chaotic manner as possible*. They have no nice mathematical structure by design, so it’s very unlikely that there’s a better approach than the 2^160-iteration brute-force algorithm described above.

*that’s not to say that hash functions are just kitchen sinks of arbitrary operations. They’re still very carefully designed to have good dispersion properties, be resistant to a bunch of different cryptographic attacks, produce statistically random output, and achieve these goals efficiently (in terms of speed in software/hardware implementations).

You should feel much more confident if your Bitcoin is in an address where the world doesn’t know your public key. This means that whenever you spend any Bitcoin from an address (inevitably revealing the public key in the process), you should empty the entire address and send the remaining balance to a fresh unused address.

You’re still revealing your public key, but only very briefly: as soon as the block containing that transaction is confirmed, it becomes incredibly computationally difficult to rewrite the history. In essence, it only gives an evil adversary a maximum of a few minutes to try to break the discrete logarithm problem.

Many wallet implementations create fresh addresses for every transaction, so my recommendation is to use one of those (e.g. the Trezor hardware wallet).

Since ‘not reusing addresses’ is already known to be best practice, then you might be tempted to ask:

Is this advice really necessary?

At the time of writing, someone has 94258 Bitcoin* in a regular (pay-to-public-key-hash) address which has revealed its public key. So, if you are reading this and are the owner of 1P5ZEDWTKTFGxQjZphgWPQUpe554WKDfHQ, then I’d recommend moving the balance to a fresh address imminently.

For example, if you look at one of the recent outgoing transactions, the ‘sigscript’ is the following:

The last line here (68 hexadecimal characters, i.e. 34 bytes) contains 0x21 (meaning ’33’) followed by the 33-byte public key (a point on the elliptic curve). That is to say, there’s currently 3 billion dollars resting in an oft-reused Bitcoin address with an exposed public key, protected only by the difficulty of the elliptic curve discrete logarithm problem.