An efficient prime for number-theoretic transforms

Posted on September 1, 2021 by apgoucher

It is given by

. This means that, in the finite field

, 2^32 functions as a primitive 6th root of unity, and therefore 2 is a primitive 192nd root of unity. It turns out that this field possesses multiple properties which make it well-suited to performing number-theoretic transforms (the finite field analogue of the Fast Fourier Transform).

Firstly, note that arithmetic is especially convenient in this field. An element of the field can be represented as an unsigned 64-bit integer, since p is slightly less than 2^64. We can also efficiently reduce modulo p without involving multiplication or division. In particular, if we have a non-negative integer n less than 2^159, then we can write it in the form:

If A happened to be larger than C, and therefore the result of the subtraction underflowed, then we can correct for this by adding p to the result. Now we have a 96-bit integer, and wish to reduce it further to a 64-bit integer less than p. To do this, we note that 2^64 is congruent to 2^32 − 1, so we can multiply B by 2^32 using a binary shift and a subtraction, and then add it to the result. We might encounter an overflow, but we can correct for that by subtracting p.

In C/C++, the algorithm is as follows: 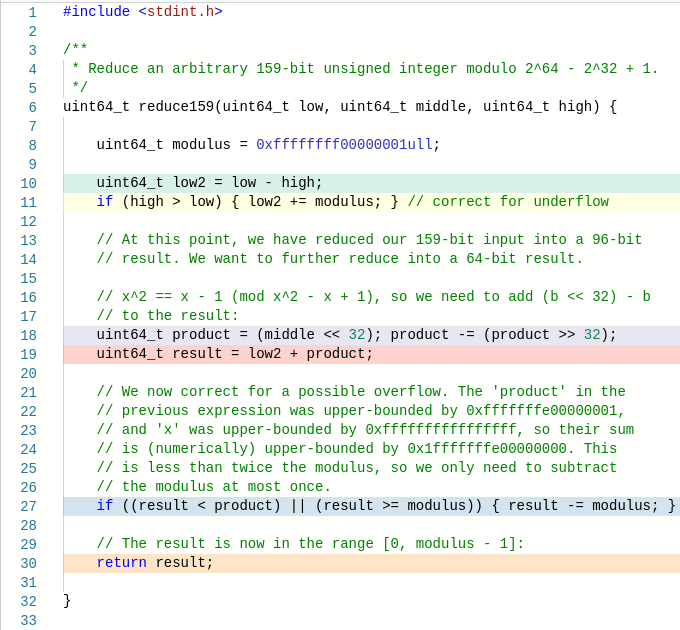 This involves no multiplication or division instructions. Indeed, we can take a look at the compiled assembly code by using the Godbolt Compiler Explorer: 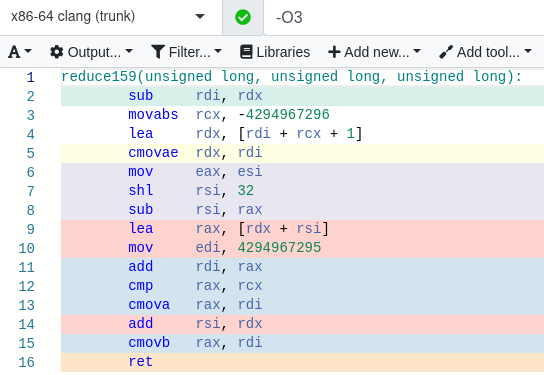 Observe that, using LLVM as the compiler, the resulting code is branchless (despite the word ‘if’ appearing twice in the source code) and all of the instructions are particularly cheap.

Now, why would we end up with a 159-bit integer in the first place and want to reduce it? There are two occasions where this subroutine is useful:

The latter allows us to cheaply multiply an element of our field by any power of 2. In particular, if we want to multiply by 2^(96a + b), then do the following:

That is to say, multiplying by any 192nd root of unity is ‘fast’, bypassing the need to perform a general multiplication. (This is particularly useful for GPUs, where there isn’t a 64-bit multiplier in hardware, so multiplication expands to many invocations of the hardware multiplier.)

Other roots of unity

As well as possessing these 192nd roots of unity, the field also contains roots of unity of any order dividing p − 1. This factorises as follows:

where those odd prime factors are the five known Fermat primes. We can perform a Fourier transform of any length that divides p − 1, since all of the requisite roots of unity exist, but this will be especially efficient if we only involve the smaller prime factors.

Most of these other roots of unity are ‘slow’, meaning that there is no obvious way to multiply by them without performing a general multiplication. There is, however, a nice observation by Schönhage:

A length-N FFT involves the Nth roots of unity, so we would want to use FFTs of length dividing 192 (or 384 using the Schönhage trick) whenever possible. This suggests the following algorithm for convolving two sequences:

Since there are at most 5 rounds of FFTs, we only need to apply arbitrary twiddle-factors (which can be precomputed and stored in a table) 4 times, i.e. between successive rounds of FFTs. Compare this to an FFT over the complex numbers, where there are only 4 ‘fast’ roots of unity (±1 and ±i) and therefore irrational twiddle factors must be applied much more often.

We will achieve the desired speed-up by working over a ring with many “easy” powers of ω. Hence, the new faster integer multiplication algorithm is based on two key ideas:

is a fixed-size ring with these desirable properties. It supports multiplication of integers up to

digits, so the result can be computed by a convolution of length

. The maximum absolute value of a coefficient that could occur as a result of such a convolution is

, so the coefficient can be recovered exactly if the convolution is performed over

Of course, Fürer’s paper was interested in the asymptotics of integer multiplication, so it needs to work for arbitrarily large integers (not just integers of size at most 12 GB). The remaining idea was therefore to apply this idea recursively: to split a length-N integer into chunks of size O(log N), and use Fürer’s algorithm itself to handle those chunks (by splitting into chunks of size O(log log N), and so forth, until reaching a ‘base case’ where the integers are sufficiently small that FFT-based methods are unhelpful).

The number of layers of recursion is therefore the number of times you need to iteratively take the logarithm of N before log log log … log log N < K, where K is the base-case cutoff point. This is called the iterated logarithm, and denoted

Each layer of recursion in Fürer’s algorithm costs a constant factor F more than the previous layer, so the overall complexity is

. It was the asymptotically fastest multiplication algorithm between its invention in 2007 (taking the crown from Schönhage-Strassen) and 2016 (when an O(N log N) algorithm was discovered).

In practice, large integer multiplication tends to use either Schönhage-Strassen (in the case of the GNU Multiprecision Library), or floating-point FFTs, or a bunch of number-theoretic transforms over different primes with a final application of the Chinese Remainder Theorem (in the case of Alexander Yee’s y-cruncher). The primes used by these number-theoretic transforms don’t support any ‘fast’ roots of unity, though; all of the twiddle factors are applied using multiplications.

This suggests that a number-theoretic transform over the field of 18446744069414584321 elements may indeed be competitive for the sizes of integers it supports (e.g. up to 12 GB). For larger integers, we can use the Schönhage-Strassen algorithm with this prime field as a base case (one layer of Schönhage-Strassen being more than enough to support multiplication of integers that can be stored in practice).

2 Responses to An efficient prime for number-theoretic transforms