Hamming backups: a 2-of-3 variant of SeedXOR

EDIT (2021-10-14): I’ve written a reference implementation of the Hamming backup idea introduced in this article.

SeedXOR is an approach for splitting a Bitcoin wallet seed, adhering to the BIP39 standard, into N ‘parts’ (each the same size as the original) which are each a valid BIP39 seed. It is used by the COLDCARD wallet and preferred over more complicated Shamir secret sharing schemes on the basis that:

On the other hand, Shamir secret sharing enables ‘M-of-N’ backups, where only M parts are necessary to reconstruct the original seed (instead of all N parts).

Here we present a ‘2-of-3’ variant of SeedXOR which retains many of the desirable properties of the original SeedXOR:

However, unlike a regular SeedXOR backup, this modified variant allows for full recovery of the original seed even when one of the three parts is missing:

This new variant is called a ‘Hamming backup‘ because the construction is based on an extended Hamming code. Generating a Hamming backup and recovering a seed from a Hamming backup can be done using only the XOR operation, as with SeedXOR. It’s slightly more complicated than SeedXOR in its construction (which is inevitable, because this implements a 2-of-3 scheme instead of an N-of-N scheme), but still possible to do with pencil and paper using only the XOR operation.

The linear (bitwise XOR) relations that we impose between the different 128-bit values are summarised in the following diagram. (The analogous diagram for ordinary SeedXOR would be a single circle containing N+1 values, namely the seed X together with the N parts A, B, …) 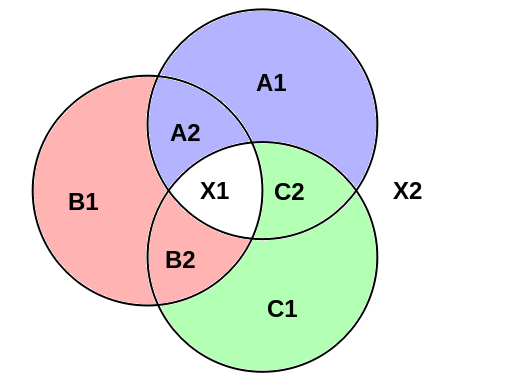 and analogously for the other two circles:

Equivalently, for each of these quartets, any one of the four values is given by the bitwise XOR of the other three.

Further linear relations can be derived from combining existing relations; for example, X1 = A1 ⊕ B1 ⊕ C1 and X2 = A2 ⊕ B2 ⊕ C2. Indeed, there is a group-like closure property: if you take any 3 of the 8 values in the diagram and bitwise-XOR them together, the result of the calculation is one of the 8 original values.

We’ll now discuss how these relations enable the seed X to be recovered from any two of the three parts {A,B,C} of a Hamming backup. Then we’ll discuss how to actually produce a Hamming backup {A,B,C} from an existing seed X together with a source of secure randomness (specifically, by generating A randomly and then deterministically deriving B and C from A and X).

Recovering a seed from a Hamming backup

The relations have the property that, given parts A and B, we can recover the seed X as follows:

This can be done in three applications of XOR, rather than four, by precomputing the common subexpression A2 ⊕ B1. As such, this is only 50% slower than recovering a seed from a 2-of-2 SeedXOR backup, rather than twice as slow.

Moreover, the whole diagram has order-3 cyclic symmetry, so you can do the same thing with parts B and C, or with parts C and A. That is to say, you can recover the original seed with any two of the three parts.

Important note: when using two parts to generate the seed X, it is important that the two parts are used in the correct order (swapping the roles of A and B, for instance, would result in us generating the remaining part C instead of the desired secret X). If we made this mistake (and recovered C instead of X), then X can be derived by straightforwardly XORing together A, B, and C.

How does one construct a Hamming backup of an existing seed X? The first part, A, should be securely uniformly randomly generated. This will ensure that no information about X is leaked to an attacker who possesses only one of the parts {A, B, C}. (Like SeedXOR, one-time pads, and Shamir secret sharing, this is an information-theoretically secure construction, rather than a construction that depends upon the computational intractability of some problem.)

The remaining parts of the backup can be derived by moving anticlockwise around the diagram, obtaining each value from the XORing the previous two (in cyclic order around the diagram) together with one of the values from the seed X. Specifically, we compute:

The last two lines here are redundant — they compute the values A1 and A2 with which we already started — but are useful as a validity check in case you made errors whilst computing B1, B2, C1, and C2. An independent check is to load {A,B,C} into a COLDCARD hardware wallet, pretending that it’s a regular 3-of-3 SeedXOR. If the Hamming backup has been created correctly, this should load the original seed X = A ⊕ B ⊕ C.

BIP39-friendly way to split X into X1 and X2

If we only cared about the machine implementation of Hamming backups, then it would be straightforward to split the 256-bit value X (i.e. the entropy part of the seed, with no checksum) into an initial 128-bit segment and a final 128-bit segment.

However, part of the reason for favouring SeedXOR and Hamming backups over more complicated Shamir schemes is the ability to perform the calculations relatively quickly using pencil and paper without the aid of a computer.

These are each represented either as English words (from a 2048-element wordlist) or as 3-digit hexadecimal numbers where the first digit encodes 3 bits and the other two digits each encode 4 bits, making up the total of 11.

The hexadecimal representation is used when computing SeedXOR manually; a 16×16 lookup table is provided for applying the bitwise XOR operation to hexadecimal digits.

So that Hamming backups can be conveniently computed using the same mechanisms used by ordinary SeedXOR, we propose splitting the 24-word seed X into the 128-bit components X1, X2 as follows:

On paper, we would write the hexadecimal digits of X1 directly above those of X2, like so:

Observe that only the first hex digit of word 24 is included (since the other two are checksum digits). Also, the first two digits of word 12 contribute to X1, whereas the third digit contributes to X2.

Since we’re only dealing with a degree-1 polynomial, this construction is linear (which is why we were able to implement it exclusively using XOR). Shamir schemes based on higher-degree polynomials are not amenable to this technique, so do not give rise to arbitrary M-of-N analogues of Hamming backups.

The fact that Hamming backups only offer a 2-of-3 scheme is a limitation compared with the arbitrary M-of-N schemes possible with general Shamir secret sharing. It may be possible to implement M-of-N schemes using more sophisticated binary error-correcting codes, but doing so entails further sacrificing the simplicity of the original SeedXOR scheme.

1 Response to Hamming backups: a 2-of-3 variant of SeedXOR