A pair of people called Pavel have independently developed remarkable automata that last record-breakingly long before halting. In both cases, the number of timesteps that it takes for each automaton to halt is so large that it cannot be written down except using iterated exponentiation. Iterated exponentiation is known as ‘tetration’, so we shall describe these automata as ‘tetrational’.

The first one of these is a 6-state 2-symbol Turing machine by Pavel Kropitz last month which takes approximately:

timesteps to halt (where exponentiation is right-associative, so the rightmost exponentiation is applied first). This is a huge improvement over anything known before May 2022; prior to that, the record was small enough that you could explicitly write down the digits of the number of timesteps (a 36535-digit number).

The lifespan of the new record-holder cannot be stored in floating-point format, but can easily be stored and manipulated in a format called level-index notation. Robert Munafo’s HyperCalc calculator uses this format internally, which is how I was able to get the above approximation from the exact formula:

for the number of ‘1’s left on the tape when the machine halts. This is a lower bound on the number of timesteps that the Turing machine performs, and is tight in the sense that it doesn’t affect the leading digits in the ‘4.023873729…’ at the top of the power-tower.

Shawn Ligocki (who has also held the 6-state 2-symbol Busy Beaver record on a number of occasions, including for two brief 3-day stretches last month!) has written an excellent explanation of how the lifespan of Pavel’s Turing machine was computed.

In the previous month, Pavel Grankovskiy built a configuration in Conway’s Game of Life which initially fits inside a 104-by-96 bounding box and takes approximately:

timesteps to cleanly and completely self-destruct. Here is the configuration, colour-coded by the author to indicate the various parts of the machinery: 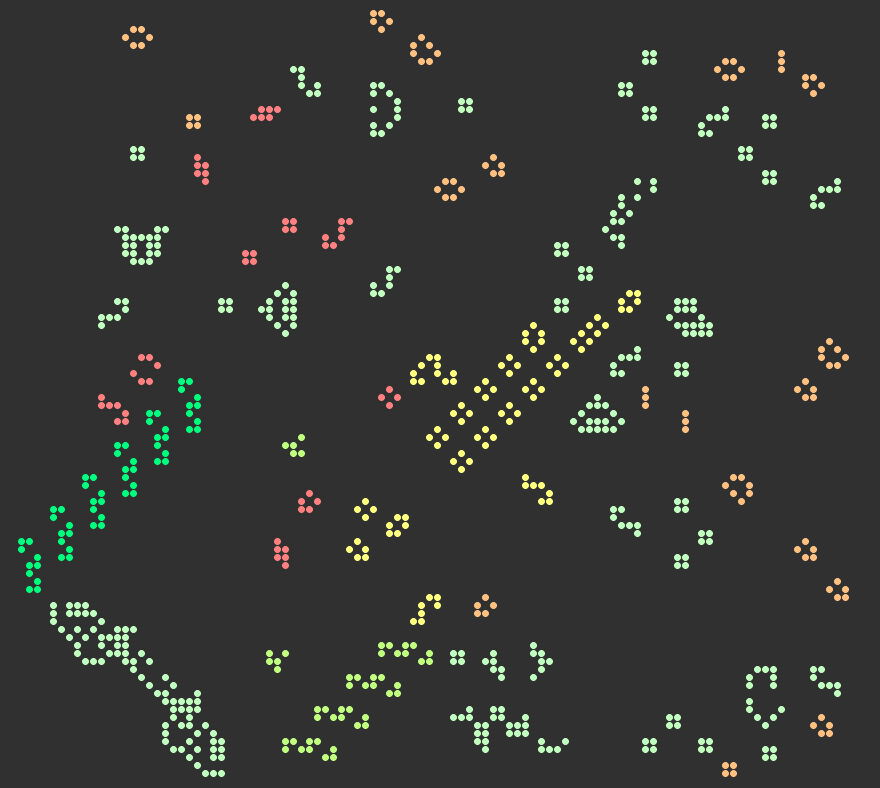 The lower sawtooth is driven by a continuous gun, causing the blocks to materialise at exponentially sparse intervals (each cycle of materialising a block and pulling it to the origin takes 121 times longer than the previous cycle). The upper sawtooth is driven by the exponentially sparse output of the lower sawtooth, causing the blocks to materialise at tetrationally sparse intervals (each cycle being roughly 121 to the power of the previous cycle). Each time this happens, one of the neon-green objects at the far left of the pattern is deleted, until eventually activating a self-destruction sequence.

The clean self-destruction is accomplished by the salmon and orange objects: the salmon objects were manually placed by the author and ensure that the spaceship is cleanly destroyed from behind; the orange cells were placed by an automated search program which uses beam search to find seeds of destruction for a given input pattern.

Subsequently, various authors have managed to optimise this pattern, adding extra layers to the power tower whilst ensuring that the initial configuration fits within a bounding box with area strictly less than 10000 cells. It seems that the current record-holder has a tower of fourteen 10s followed by a real in the interval [1, 10), so it’s one level below the other Pavel’s Turing machine (not that it’s at all reasonable to compare the lifespan of a 6-state 2-symbol Busy Beaver with that of a sub-10000-cell diehard).

Brett Berger has written an article which discusses the design and history of Pavel’s diehard (there was an earlier design with a single sawtooth mechanism which lasted just over 10^870 timesteps, later optimised by Dean Hickerson up to 10^1595 timesteps).

Brett’s article also discusses a tetrational automaton of his own in a puzzle game called Opus Magnum. That has a lifespan of approximately 10↑↑41 timesteps in Knuth’s up-arrow notation: that is to say, a power-tower of 41 copies of the number 10. This contraption contains two organs called recursive filters, which perform the same duty as the sawtooth mechanisms in Pavel’s diehard.

Stacking more recursive filters corresponds to adding more up-arrows. Whilst the recently discovered 6-state 2-symbol Turing machine doesn’t seem to be obviously generalisable in this way, there have been other Turing machines which have taken advantage of this idea for more than a half-decade: in 1964, Milton Green described a family of Turing machines for the busy beaver problem, where the kth machine has 2k + 4 states and takes more than

The next barrier to break is to progress from these primitive-recursive functions to the Ackermann function (level ω in the fast-growing hierarchy). For the contraptions in Conway’s Game of Life and Opus Magnum, this would involve building an organ which can repeatedly build and stack additional recursive filters.

The researchers with usernames Deedlit and Wythagoras have built Turing machines which achieve levels ω (‘Ackermannian growth’) and ω+1 (‘expandal growth’), including an explicit 15-state machine which consumes the output of the 5-state Busy Beaver record-holder (which leaves 2046 copies of a particular motif on its tape) and uses the other 10 states to boost this to more than

Further beyond this is level ε0 in the fast-growing hierarchy, a function that grows so quickly that it cannot be proved total in Peano arithmetic. Wythagoras found an 85-state machine based on the Kirby-Paris hydra that takes more than