This article was originally supposed to be about TREE(3) and the busy beaver function. However, I realised the potential of turning TREE(3) into a two-player finite game, which is surprisingly fun and means that I’ve ended up leaving uncomputable functions until a later post.

Last time, we explored a fast-growing hierarchy of functions. We considered the Goodstein sequence (or rather, the essentially equivalent problem C8′) to produce a function approximately equal to f_(ε_0), where ε_0 is a rather large countable ordinal. Applying this construction recursively would correspond to ordinals such as ε_0 + ω, which are not much larger than ε_0. So, if we want faster functions, we need more powerful ideas.

Usually, we expect fast-growing functions to have a relatively smooth, steady start. For instance, the Ackermann function begins {3, 4, 8, 65536, 2↑↑(2↑↑65536), …}, and the first four terms are quite small. By contrast, the function TREE begins with TREE(1) = 1, TREE(2) = 3 and TREE(3) is so vastly, incredibly large that it greatly exceeds anything you can express in a reasonable amount of space with iteration, recursion and everything else mentioned in the previous post, including C8′ and the Goodstein function.

So, what exactly is TREE? The definition is quite simple, once we’ve defined a few terms along the way. We consider rooted k-labelled trees, which are connected acyclic graphs where one vertex is identified as the ‘root’, and each vertex can have one of k colours. An example is shown below: 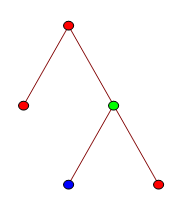 There is a binary operator, inf (not related to the infimum of a set), which returns the latest common ancestor of two vertices. Consider the tree above. If the blue vertex is called x and the green vertex is called y, then x inf y = y. Similarly, the inf of the two non-root red vertices is the root vertex.

Equivalently, this means that T is a topological minor of S (where we direct the edges to respect the root vertex). The first tree is homeomorphically embeddable into this one: 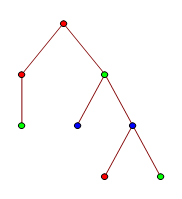 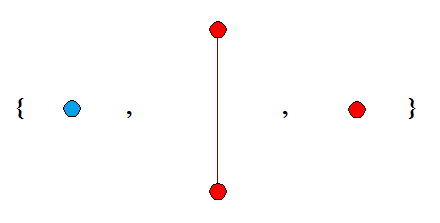 The sequence above is the longest such sequence of 2-labelled trees, so TREE(2) = 3. For any sequence, the first tree must be a single isolated vertex, and that colour is not allowed to occur in any later tree. The proof follows trivially. Now consider 3-labelled trees. We can have an extremely long sequence, such as one which starts like this: 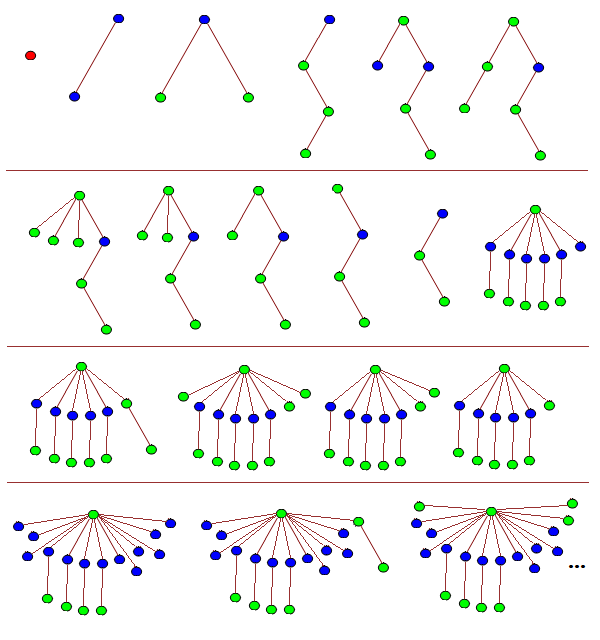 As you can see, by T_20 it’s getting difficult to draw the trees. A much more efficient notation is to use balanced parentheses:

A related function, tree, asks for the longest sequence {U_1, U_2, …, U_tree(r)} of 1-labelled trees such that |U_n| ≤ n + r (for all n) and no tree is homeomorphically embeddable into a later tree. By extending the sequence shown above, it can be proved that TREE(3) has the following (weak) lower bound:

Proof (added 2020-07-24 in response to surprisingly hostile claims that I never had a proof of this bound): After the sequence described above, one can create a new tree, T24, which is of the form:

as () is necessarily the last element of the maximal-length sequence for tree(7). We can then extend the sequence further by ‘burning’ another blue node:

The game of Chomp

For a quick and refreshing detour from large numbers, we’ll consider the game of Chomp. We begin with a rectangular chocolate bar of size m by n, the bottom-left corner of which has been laced with cyanide. 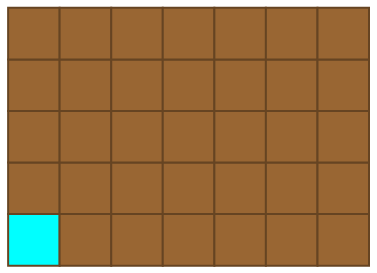 Players alternate turns, eating a square of chocolate together with everything above and to the right of it. For instance, after the first move the resulting configuration might resemble this: 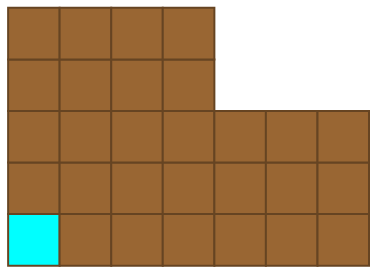 Then, the second player responds: 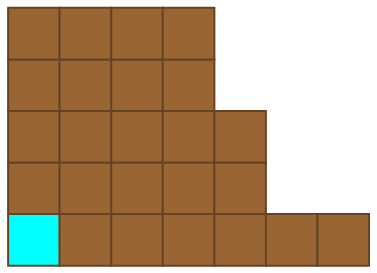 This continues until some unlucky person is left with the cyanide-laced square of chocolate and endures a slow, painful death. Who has the winning strategy? Without explicitly constructing a winning streategy, it’s possible to prove that the first player can force a win through an argument known as strategy stealing.

Assume that the second player has a winning strategy, with the intention of deriving a contradiction. Let the first player (I generally use Gabriel and Vishal as example names in combinatorial game theory, and we’ll use alphabetical order, so Gabriel) eat the top-right square of chocolate: 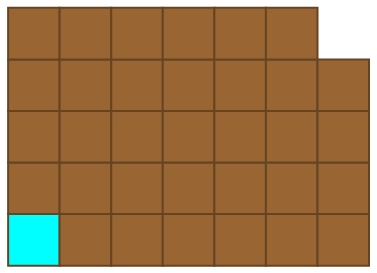 Now, Vishal has a winning strategy at this point. Let’s assume (without any real loss of generality) that he can force a win by making this move:

Gabriel could have made this move to begin with, so Vishal can’t possibly have a winning strategy. Reductio ad absurdum. As the game cannot terminate in a draw, we conclude that Gabriel has the winning strategy. This proof is heavily non-constructive, and no-one knows what this winning strategy is for arbitrary positive integers m,n.

Chomp is called an impartial game, since the same moves are theoretically available to each player, and it just depends on whose turn it is. Nim is another example. Both of these can be expressed as poset games, where players take turns to remove any element of a partially-ordered set together with all greater elements.

Making a game out of TREE(3)

That was a well-deserved distraction, but let’s return to TREE(3). We can define a two-player impartial game (which is, incidentally, a poset game) with the following rules:

By definition, such a game lasts at most TREE(3) turns and can never result in a draw. I don’t know what the parity of TREE(3) is, so I don’t know who wins the longest game. Indeed, I don’t even know which player has the winning strategy in TREE(3), and an exhaustive search is impractical. [Edited 2020-08-21: unfortunately, there’s a trivial winning strategy for the first player; after playing a single red vertex, respond to every move by your opponent by simply playing your opponent’s last tree with the colours blue and green reversed. An analogous game on subcubic graphs would be more interesting.]

An example game is this one, which Vishal wins after 8 turns:

Believe it or not, all reasonably-sized games of Chomp can occur as positions in natural games of TREE(3). Firstly, we return to the previous scheme for getting really long sequences:

Now, we can continue this for a very long time (x moves, where x has this unimaginably large lower bound):

After this incredibly long sequence of moves, the next six moves might be these (let m and n be positive integers where m + n < x; in practice, x is so large that it is unrestrictive):

This might not seem like a particularly poor move on Vishal’s part, but it transpires that Gabriel now has a definite winning strategy. If a player plays a single vertex (blue or green, since red was exhausted on the first move), the opponent can win by playing the single vertex of the other colour. Also note that no blue node can have a child, and no tree can have a depth more than three. In other words, subsequent moves resemble this:

This particular move is abbreviated to (4,3). Due to the ‘forbidden’ trees which appeared first, all moves must be of the form (a,b), where a < m and b < n. Interpreting these as coordinates, you may notice that this is precisely emulating the game of Chomp on a m by n grid! Exciting!

Consequently, Gabriel can force Vishal to ultimately play (0,0), which is a single green vertex. Gabriel immediately wins by playing a single blue vertex, leaving Vishal with no legal moves.

33 Responses to TREE(3) and impartial games