This post contains miscellaneous topics which don’t deserve individual articles, but are still worth mentioning nonetheless.

When you look at a map of the world, the most common projection is the Mercator projection. This is a conformal map, which means that angles between curves are preserved and there is no local distortion. Another possible map projection, which conformally mapping the sphere to the (extended complex) plane, is stereographic projection. One possible formula is given below:

The expression above converts latitude and longitude (in degrees) to a complex number, corresponding to a point on the (extended) complex plane. This is a stereographic projection, thus angles are preserved and circles drawn on the surface of the Earth map to circles on the complex plane. Moreover, meridians are mapped to rays through the origin. Here are a few places on Earth, together with their latitude/longitude and complex representation:

The numbers given in bold are exact values; others are approximations only. The point corresponding to -1 on the complex plane is just off of the north-east coast of Semisopochnoi Island, Alaska. The real line is the great circle passing through the north pole, south pole and Trinity.

An ambigram is a centrally symmetric motif, typically displaying a word. For instance, one example from ambigram.com is the word ‘ambigram’ itself, rendered below:

I was wondering whether it would be possible to write a true statement in first-order logic together with logical conjunctions and arithmetic operations, which also functions as an ambigram. There are trivial examples such as 0 = 0. I subsequently found a slightly less trivial ambigram, namely this one:

Of course, it would be more exciting to have a statement involving logical connectives and quantifiers. Because the universal and existential quantifiers rotate to give the letters ‘A’ and ‘E’, respectively, ambigrams in first-order logic are really quite contrived. I managed to cheat slightly by using the carat ^ to denote exponentiation, and for its rotation to be the symbol for logical disjunction.

In an earlier post, I alluded to the existence of a very large and rather slow (c/69) spaceship in the HighLife cellular automaton. Due to a combined effort involving Dean Hickerson, Matthias Merzenich and me, we have managed to reduce its size considerably and actually build more complicated constructs involving it. These examples can be downloaded and simulated rather quickly in Golly.

If you recall, the previous idea relied on a complicated (8, 8) push reaction and a very simple (4,4) pull reaction, which can be joined together by a massive train of replicator units emulating addition modulo 2. The size of the resulting Basilisk was impractically large, so we endeavoured to optimise it. The first breakthrough came when Matthias Merzenich discovered a far simpler reaction capable of pushing debris by the vector (6, 6). Even when two are composed to yield a (12, 12) push (commensurate with the (4, 4) pull at the opposite end), the period is still marginally smaller than the minimum attainable with old technology. 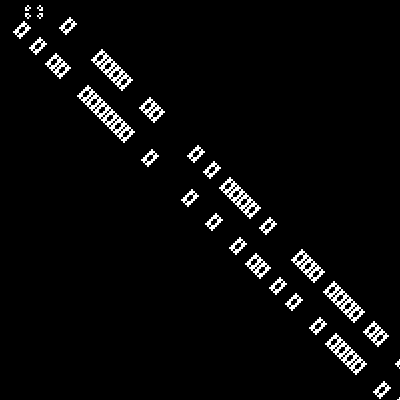 The arrangement with symmetry group isomorphic to V4 is repeatedly pushed northwest by the train of replicators. Due to the small period, the length of the minimal Basilisk found by my search program ended up around 15000 replicator units. Basilisks can be combined together to yield rakes capable of periodically emitting gliders. I have uploaded an example comprising six cooperating Basilisks.

Even more ambitious was the concept of a static arrangement that periodically emits Basilisks at regular intervals. The most familiar analogue is the standard Gosperian glider gun in Life:

Of course, Basilisks are massive compared with the tiny gliders emitted by Bill Gosper’s gun, and too complicated and chaotic to assemble incrementally. Eventually, I thought of an alternative idea, which is to bombard the Basilisk with a few gliders to catalyse replication — by the linearity of addition modulo 2, any replicator track will copy itself when left to its own devices. Then, another wave of gliders is required to sterilise the replicators to yield ordinary Basilisks. By using high-period glider guns (thanks go to Dean Hickerson for providing them) to do this automatically, we have a machine for breeding Basilisks (download Golly file). 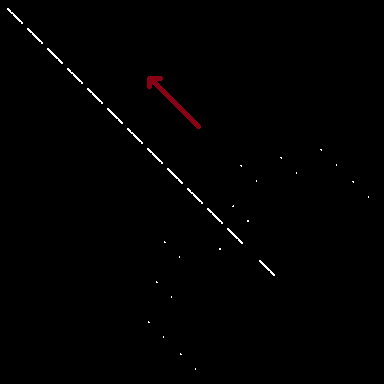 The mechanism (repeated breeding and sterilisation) is completely different from any other spaceship gun in any cellular automaton, and only works for XOR-extendable spaceships.