Suppose we have a set of n people, and we want to encapsulate a particular relation which holds between them. For instance, the people who have featured on the cipher solvers page can be represented by a directed acyclic graph. We have a directed edge A → B if person A dominates person B, that is to say that A solved a proper superset of the ciphers solved by B. There is also the transitivity property: A → B and B → C together imply A → C. I have removed these extraneous edges from the digraph to improve clarity. 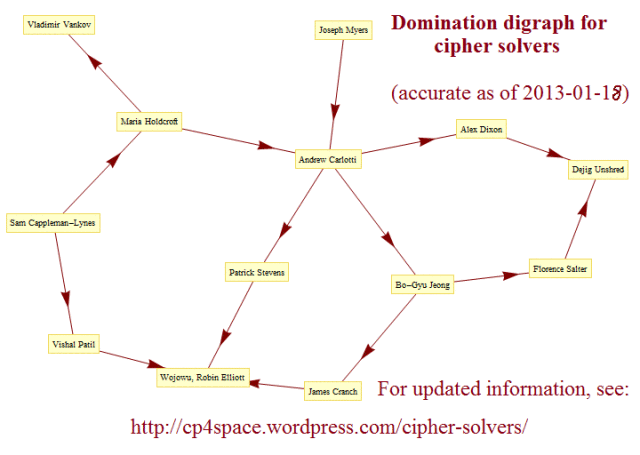 Sam Cappleman-Lynes and Joseph Myers are known as maximal elements, as no-one dominates either of them. The entire graph is an example of a partially ordered set, or poset.

For more symmetrical relationships, it is better to use an undirected graph. For instance, we can connect two people (vertices) with an edge if they are friends with each other. There is no convenient way to analyse the entire global friendship graph, although social networks provide good approximations. There has been a paper examining this graph and revealing certain interesting properties; for instance, the largest connected component of a particular network features about 700 million people, whereas the second largest contains roughly 2000 people.

From graphs to hypergraphs

Vishal Patil and I realised that an ordinary graph is insufficient to embody certain concepts in social communities. For instance, if A, B and C are mutual friends, they would be represented by the cycle graph C_3. However, we can make a more subtle distinction: do the three people know each other merely pairwise, or have they all met simultaneously? By using something called a hypergraph, we can distinguish between non-trivial and trivial mutual friends: 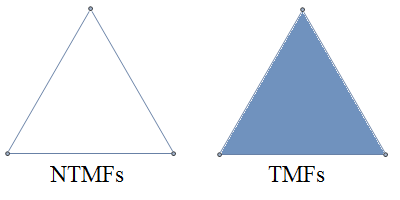 Trivial mutual friends are far more common, and are just three people who know each other having been together simultaneously. Non-trivial mutual friends (NTMFs, a term originally coined by Vishal, which has later passed into widespread use) are much rarer; the canonical example provided by Vishal was that someone he met at school later encountered James Aaronson on a tour of Israel. An analogy is that 6, 10 and 15 are pairwise non-coprime, but are coprime when considered together.

An example of non-unique non-trivial mutual friends includes me, Vishal, Jovan and Katya. The simplical complex corresponding to our acquaintancy is given below: 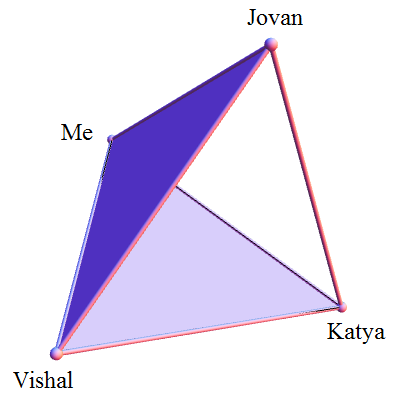 As with all NUNTMFs, the situation is represented by a hollow tetrahedron with between zero and four faces (a solid tetrahedron would correspond to a set of four trivial mutual friends). The possibilities are shown below:

Below each of these simplicial complexes is a number called the encounter count. This is the minimum number of encounters necessary for this relationship to be satisfied, i.e. the number of maximal elements in the partially ordered set of simplices under inclusion. Trivial mutual friends have an encounter count of 1.

The extremal cases of either zero or four triplets of TMFs in a set of four NUNTMFs are very symmetrical, so Vishal decided upon a new name. Rather than describing the configurations as the tongue-twisting ‘encounter–count–extremal non-unique’, he decided upon the much more manageable ‘counter-unique’. I don’t know of any real-life examples of counter-unique NTMFs, although I have been in a partial tetrahedron where five of the edges and none of the faces were established: 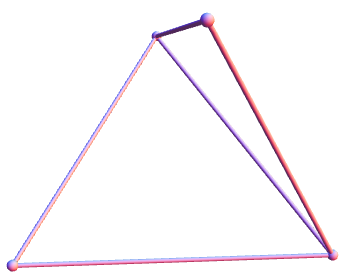 The way in which this peculiar object formed was quite surprising. Radley and I knew each other ab initio, as did Suzy and Miranda. Slightly later, but still ages ago, Suzy met me (thus creating a path graph on four vertices). Radley subsequently met Miranda at their college (Homerton), thus completing a 4-cycle. The fifth edge was completed when Radley met Suzy at the Cambridge Union Society, and we were tantalisingly close to becoming counter-unique non-trivial mutual friends. However, when three of us went to a formal (evening dinner) at Trinity, a face was created and thus the opportunity destroyed.

If you’ve been affected by any of the issues in this blog post, please mention so in the ‘comments’ section below. I would particularly like to hear if you know any real-life examples of counter-unique non-trivial mutual friends, and ideally how they became established.