Before we begin, there are a few late items of news worth discussing:

Suppose we have a circle in the plane, and wish to transform it into its reflection by a homotopy (continuous deformation). Moreover, at every point in time, the curve must be an immersion of the circle: it is allowed to smoothly self-intersect, but cannot have any cusps or singularities. Can the transformation be done?

However, for a sphere in three-dimensional space, this proof fails and, remarkably, it is actually possible to evert a sphere. There’s a video explaining the problem and briefly demonstrating the solution discovered by Bill Thurston, who proved that it is possible to perturb an arbitrary homotopy to remove any singularities.

Another solution is symmetric with respect to time, with the half-way model being the Morin surface. If we conjugate a rotation of the Morin surface by 90° with a homotopy transforming a sphere into a Morin surface, then we get the complete sphere eversion. This is more ad hoc than Thurston’s corrugations, and does not generalise easily to more complicated surfaces.

The aforementioned Morin, who is a retired topologist, was blind from the age of six; despite this, he was able to not only find an explicit solution to sphere eversion, but also discover the first parametrisation of Boy’s surface, an immersion of the real projective plane. 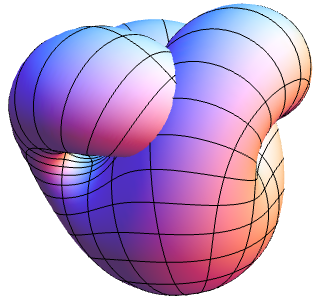 Since the real projective plane can be described as a sphere where antipodal points are identified, we can deduce that Boy’s surface has an Euler characteristic of 1. It is also non-orientable, a property it shares with the better-known Klein bottle (which has Euler characteristic 0). Interestingly, the name of the Klein bottle and its common realisation as a bottle with its neck re-entering through a hole and connecting to the base are the result of a German mistranslation.

A very impressive theorem states that any connected compact surface can be identified uniquely up to homeomorphism by the Euler characteristic, orientability and number of boundary components. Hence, they can be described as connected sums of projective planes (‘crosscaps’), tori (‘handles’) and closed discs (‘holes’).